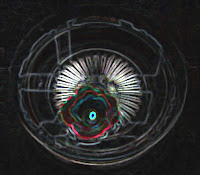 Yesterday I said you can do candle magic with pretty much any candle you happen to have around.

That’s true, but your magic can seem more personal if you make your own equipment. Luckily, candles are really simple to make.

Rolled candles are the easiest. You can buy beeswax sheets from most candlemaking shops and an 8in by 8in sheet will roll into a candle that is 1in wide.

When you buy the wax, ask for a suitable wick. Cut the wick 1/2in longer than the sheet of wax and put it 1/4in in from one edge. Then just carefully roll it up. Seal the edge by warming it briefly against a radiator.

For candle magic, you can slightly flatten an area of the wax sheet with a warm knife then inscribe a word or symbol for your spell on the flat bit before rolling it.

Candlemaking kits usually include a mould, some wick and some wax granules. To make a candle with a mould, make sure the wick is threaded through the mould before you pour the wax in. If the mould doesn’t have a little hole at the end, make one. You can seal it with Blu-tak. Tie the other end of the wick to a pencil balanced across the open end of the mould.

Melt the wax slowly on a very low heat or, ideally, over a bowl of hot water. Then tip it into the mould and leave it to set. Do not be tempted to insert the wick after making the candle by melting a hole through the set wax, even if your kit’s instructions tell you to do it. That method rarely works well.