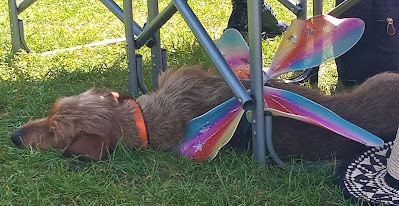 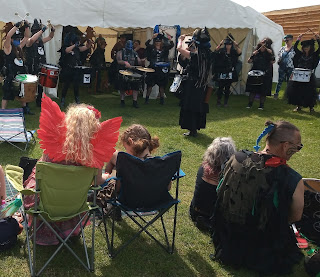 Yesterday I promised more photos from the Faerie Festival and here are some of my favourites. I snapped both the photo above and the one to the right - showing the Raven Drummers - while sitting on the grass in front of the main marquee on Saturday afternoon.

It was a glorious day to relax in the sunshine and listen to music. I also enjoyed a pint of cider or two from the Amber Beer Bus after I'd finished running a session on poppet-making in the workshop tent at the other end of the market.

You can see some pictures I took of a few market stalls below. 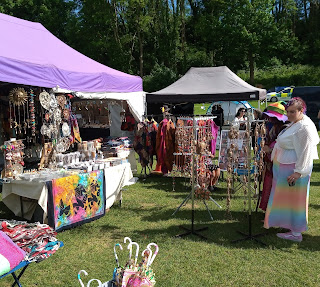 I like the photo above because it shows the bright colours you could see everywhere at the festival. People were wearing colourful clothing and there was even more lovely colourful things to buy or to just feast your eyes on. 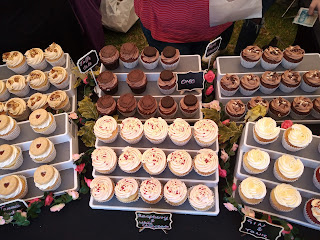 You didn't just have to feast your eyes - the cupcakes stall sold the best tasting cupcakes I've ever had. 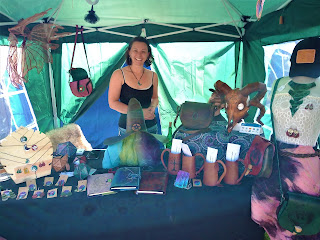 It was my birthday on the Friday of the festival - May 20th - and my husband bought me a wonderful present from Fabled Fern. Do you see the notebook in a blue-green handmade cover in the middle of the photo above?  Well, that's now my treasured possession, and I absolutely love it.

Earlier I mentioned the Amber Beer Bus, well you can see here, together withg the pizza seller and the curry stall. I took the picture quite early on the Sunday morning, which is why there aren't many people in the shot - it was much busier as the day went on!
I really enjoyed the Faerie Festival and, if you weren't there, I wish you had been. However, there's always next time. The Faerie Festival will be back from 19th-21st May 2023 in Alfriston, East Sussex. There'll be more info at https://www.magicalfestivals.co.uk/
Posted by Badwitch at 08:00 No comments:

Pagan Eye: A Big Group Hug at the Faerie Festival 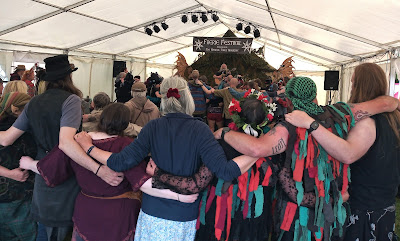 Isn't it wonderful that we can hug strangers again? Yeah, I know we've been able to hug strangers for a few months, but this is the first time since the pandemic I've been invited to take part in a big group hug.
I spent the weekend at the Faerie Festival in Alfriston in the Sussex Downs -  a lovely pagan-friendly music festival in gorgeous countryside at a campsite with hot showers. I genuinely believe some magic happened there too as despite the weather forecast being uninspiring, after rain early on Friday the skies cleared and we had gorgeous sunshine and blue skies. I also believe that magic was made possible by the people there and the performers such as Damh the Bard. You can see him on stage in the photo after he invited the audience to hug each other and sing along.
This was just one photo I took at the event. Although it doesn't show those blue skies and beautiful countryside, it summed up for me what makes the Faerie Festival so special. I intend to be back next year - but tomorrow I'll be sharing more photos and memories from this May's event so you can see the views I enjoyed.
On each Pagan Eye post, I show a photo that I find interesting, with a few words about it. It can be a seasonal image, a pagan site, an event, or just a pretty picture. If you want to send me a photo for a Pagan Eye post, please email it to badwitch1234@gmail.com Let me know what the photo shows and whether you want your name mentioned or not. For copyright reasons, the photo must be one you have taken yourself and you must confirm that you are submitting it for A Bad Witch's Blog. 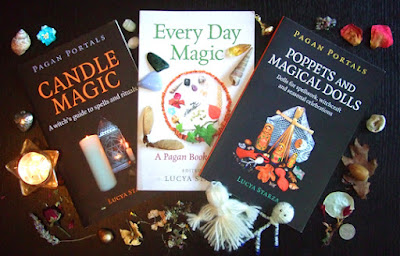 Here's details of the talks, workshops and other events I'm running from this weekend until the end of July. There's a mixture of online and in-person events. Some are free.
Saturday 21 May; I'm running a poppet-making workshop at 2pm this Saturday as part of the activities at Sussex Faerie Festival in Alfriston in the Sussex Downs. The festival itself runs from today until Sunday 22nd May, but you can just come along on the Saturday. One-day tickets cost £30 but my workshop and all the entertainment are free once you get inside.  http://www.magicalfestivals.co.uk/ 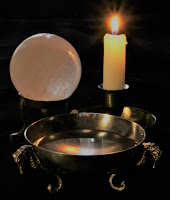 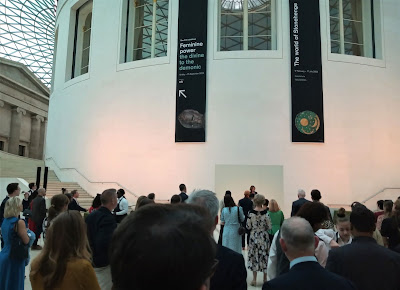 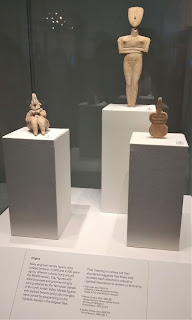 Probably the most exciting thing I've done in the past year is be part of the consultation team for the British Museum's latest exhibition: Feminine Power: the Divine to the Demonic. The best bit of all was attending the opening event earlier this week. It was invitation only, and I felt extremely honoured to be invited! Pictured at the top is the reception in the Great Hall, where people mingled, enjoyed wine and canapes as well as hearing inspiring speeches about the exhibition's themes. Pictured next to this is the first thing you see when you enter the gallery - enigmatic female forms modelled in ancient times.

Feminine Power takes a innovative cross-cultural look at the influence of female spiritual beings within global religions. It explores the significance of goddesses, demons, witches, spirits and saints in shaping how we view the world.

The invitation I was sent explained the way the exhibition explores female authority figures in cultures ancient and modern:

"From wisdom, passion and desire, to war, justice and mercy, the diverse expression of female spiritual powers around the world prompts us to reflect on how we perceive femininity and gender identity today. Worship of Pele, the Hawaiian goddess of volcanoes, reveals how her destructive capacity is venerated alongside her ability to create. The Buddhist bodhisattva of compassion, who transcends gender and is visualised in male form in Tibet and female in China and Japan, uncovers the importance of gender fluidity in some spiritual traditions. And the terrifying Hindu goddess Kali, depicted in art carrying a severed head and bloodied sword, is honoured as the Great Mother and liberator from fear and ignorance." 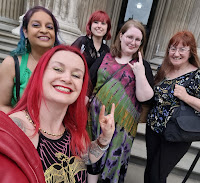 An important part of the British Museum's official research for Feminine Power was via engagement with contemporary worshippers and faith communities as well as insights from high-profile figures Leyla Hussein, Mary Beard, Elizabeth Day, Rabia Siddique and Deborah Frances-White.

On the pagan community panel were members and associates of the Children of Artemis, including myself. The picture below shows the bit in the exhibition detailing who we are, and the photo to the left shows five of us outside the British Museum as we met up to go in together. Laura Daligan and myself were also asked to visit the museum to record our impressions of two of the paintings on show. Laura talked about Circe Offering the Cup to Ulysses by John William Waterhouse, while I discussed Ithell Colquhoun's Dance of the Nine Maidens. You can see the image and listen to my words at www.britishmuseum.org/maidens and hear Laura's words at www.britishmuseum.org/circe 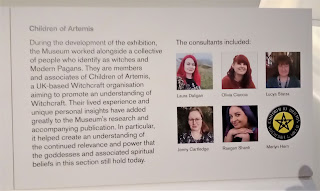 The Citi exhibition Feminine Power: The Divine to the Demonic runs from 19 May to 25 September in The Joseph Hotung Great Court Gallery at the British Museum. Tickets are £15 for adults, free for children, and concessions and group rates available. You can find out more and book here: https://www.britishmuseum.org/exhibitions/feminine-power-divine-demonic

To coincide with the exhibition, an illustrated catalogue, Feminine Power: The Divine to the Demonic, written by Belinda Crerar has been published by the British Museum Press

Posted by Badwitch at 08:00 No comments:

Magical Online & London Events in the Next Weeks 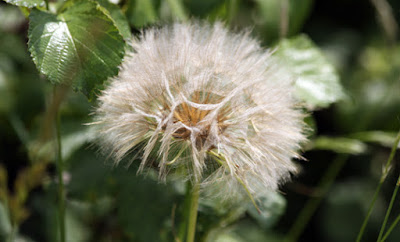 Here's a list of magical events over the next week or so with a mixture of online things you can do anywhere and in-person events in or near London - with some festivals further away.

Wednesday 18 May; Night Sky of the Vikings part 3. Part of online course with Imelda Almqvist, author of North Sea Water in my Veins. Time: 7pm. Tickets: £120 for the entire course. https://pregnant-hag-teachings.teachable.com/courses
Wednesday 18 May (every Wednesday); The Witching Hour on the Witches Inn YouTube channel. Time 8pm. Free. https://www.youtube.com/channel/UCw4Kl-MbdjsApFvodCnvANA
Thursday 19 May; Midweek Meditation with the College of Psychic Studies. Time: 3pm. Tickets: free for members/£7.50 for non members. https://www.collegeofpsychicstudies.co.uk/ 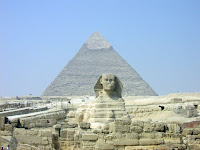 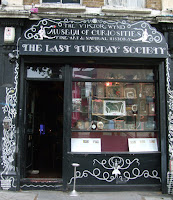 Thursday 19 May; Vodou and Art: Between the altar and the market. Lecture by Leah Gordon on zoom via Zoom through The Last Tuesday Society and The Viktor Wynd Museum of Curiosities. Time: 7.30pm. Tickets · from £5.82. https://www.eventbrite.co.uk/o/the-viktor-wynd-museum-amp-the-last-tuesday-society-12203346619
Thursday 19 May; The Trickster: An Online folklore talk with Cunning Folk. Online event. Time: 8pm, Free but donations welcome. https://www.eventbrite.com/o/cunning-folk-7829505560
Friday 20 May (every Friday); Friday Live Chat hosted by Rachel Patterson, author of the Kitchen Witch series of books. Time: 9am. Free. https://www.facebook.com/RachelPattersonbooks/ 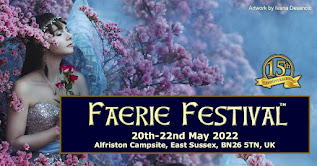 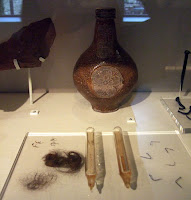 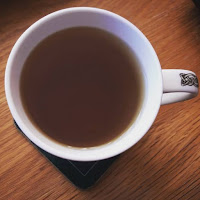 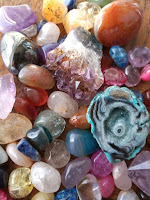 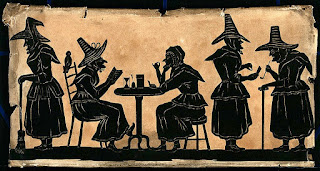 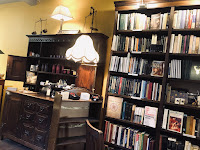 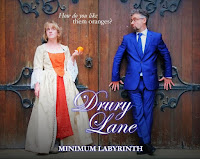