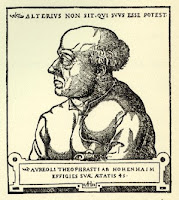 This weekend is the anniversary of the birthday of the physician and alchemist Paracelsus who was born in 1493 on either 10 or 11 November, according to different accounts.

Far from being some fusty old academic, Paracelsus lead an adventurous life that would not look out of place for a character in a Harry Potter book.

He studied alchemy, surgery and medicine at the University at Basel but got chucked out for dabbling in necromancy.

Necromancy was considered a hanging offence back in Catholic Europe of the 15th century so Paracelsus was forced to flee the town.

His travels took him through Europe and Russia to the East where, according to certain accounts, he witnessed the wild magic of gypsies and desert dervishes as well as learning secret lore from an Arabian adept.

Returning to Europe, he became an army surgeon and was so good at patching people up that he was given a job at his old university as a professor of medicine.

Unfortunately, his magical practices got him into trouble again. Accused of heresy he was once more forced to flee and re-embarked on a life of travel.

He died in 1541 in Salzburg. After his death, his theories grew in fame.

To read more about the life and theories of Paracelsus, click on these links:
http://www.alchemylab.com/paracelsus.htm
http://www.themystica.com/mystica/articles/p/paracelsus.html
http://en.wikipedia.org/wiki/Paracelsus
Posted by Badwitch at 12:11