I've recently come across a fascinating website called Old Time Remedies, which contains recipes for potions, elixirs and antidotes our ancestors used or, at least, were told to use.

A disclaimer on the site says: 'These remedies are listed only for information and amusement. They are not to be construed as medical advice, nor are they recommended for use.' Highly entertaining many of them are too, although some, such as honey for a sore throat, hardly contain bad advice. 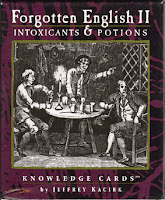 The website reminds me of Forgotten English II: Intoxicants and Potions, by Jeffrey Kacirk, which I was given as a gift by a thoughtful friend a few years ago. However, I would rather try most of the potions described on Old Time Recipes than the dubious treatments described in Kacirk's accounts of things people used to dose themselves with.

The contents of Album Nigrum is one of the most icky scraps of knowledge I wish I hadn't learnt. Album Nigrum is, apparently, the Latin name for a cure-all concocted from the excrement of mice and rats - once used both internally and externally as a remedy for many ills. Yuck!

For more information on old remedies, visit http://www.oldtimeremedies.co.uk/ and you can view the set of knowledge cards on Amazon.