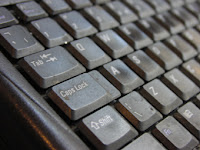 My laptop died on Sunday evening. I left it with a repair firm yesterday in the hope they could fix it and I have borrowed an old computer from a friend so I can write A Bad Witch's Blog, but I must say I am feeling upset.
It is more than the inconvenience and expense involved; I feel sad that I may have to say goodbye to something I felt attached to. My laptop was not just a tool, it was possibly my most valued possession - using someone else's computer isn't quite the same.
Giving up attachment to material things is one of those areas of spiritual development in which I admit I have a long way to go. It isn't as though Wicca teaches that it is necessary to transcend such things - that is more a Buddhist belief, I understand. However, I do believe that objects should be less important to us than, say, our friends and family. If I sulk and give my husband a hard time because my computer is busted, I would say my priorities are wrong :)
A few years ago, at a Glastonbury festival, a thief raided my tent and stole what at the time was my favourite item of clothing - a pair of purple-dyed combat trousers. I had found them at a charity shop, they fitted me perfectly and looked very unusual. I had never seen a pair quite like them before and never have since.
I expect whoever took them hoped there was money in the pockets, although there wasn't. I had known better than to leave cash or credit cards in my tent. I felt gutted. I was almost on the verge of packing up the rest of my stuff and going home.
In the hope the thief had abandoned the trousers after searching the pockets, I went along to the lost property tent and got talking to a man in the queue. I explained my loss and how upset I felt. He said: "It isn't that bad. You've got your arms, legs, eyes and ears. What more do you need to enjoy a music festival?"
He was right and when he said it I suddenly felt a great weight of anger and misery had lifted from my shoulders. I could almost say I had experienced a moment of epiphany - the realisation that material things might be nice, but they aren't as important as we often think they are.
I didn't totally give up looking for my trousers - or a replacement - but I did really enjoy the rest of Glastonbury.
So, if my computer can't be fixed, I will try to remember that lesson. Things are nice, but it is a mistake to get too attached to them.
However, if you see a pair of purple-dyed combat trousers anywhere, do let me know :)
Posted by Badwitch at 07:42

Sainsbury's were doing some cheap combat-style trousers for a while. A pair of them and some Dylon, possibly with the involvement of some bleach?

That's a good idea.
However, my old pair were genuine army surplus in heavy-duty camouflage fabric. Being purple, they would probably only have been good for soldiers trying to hide in Scottish heather :)
I bought a similar pair in green camouflage and tried to dye them but they seemed to be resistant to everything from Dylon up to Napalm.