Dryad in the forest? 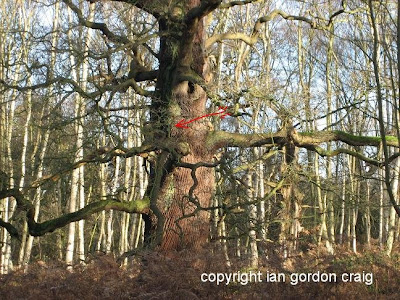 Yesterday I got an email from a fellow blogger, who writes about Robin Hood. He sent me several photographs he had taken in Sherwood Forest with an intriguing mystery. In his email, he said:


"In my capacity as an artist, and less that of the Robin Hood blogger, I was out taking photographs to aid me in my paintings. It was a fine winter day in late 2006, and I appeared to have Sherwood Forest completely to myself.
As an ex-country boy I always treat the forest with the utmost respect, but I confess on that day I climbed over the fence surrounding the Major Oak and took 10 acorns from the ground to cultivate later. When I was drawing from my photographs of various oaks a day or so later I came across a curious bump amongst the branches. At first it just annoyed me, because I couldn’t make sense of what it was and it was
complicating my attempt to draw the structure of the branches correctly. Upon enlargement it revealed itself to be rather intriguing. I make no claims as to what, if anything, this is. A Dryad? Or just a fortuitous cluster of random shapes. One thing for sure, those acorns are being well looked after!

Anyway, I thought it fun to let a few people see it for themselves.

What do you think the pictures show?

To see Robin's blog, visit: http://www.robinhoodblog.com/
Posted by Badwitch at 08:55

Looks good to me.

It's nice to share these things, and it didn't quite fit in with my more historical Sherwood Forest / Dukeries blog.

Best wishes for the future.