What is a good witch? 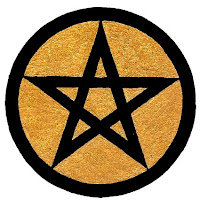 I'm a bad witch. I must be, I write something called A Bad Witch's Blog.

I don't mean I'm a evil witch - I don't curse people or blight crops or do anything wicked - I just mean that, as witch's go, I'm a bit lazy. I mentioned this when I first started writing my blog.

I'm not a member of a coven, I rarely cast spells, I'm making an effort to read more books this year but I hardly ever get to talks or workshops even if they interest me. As for furthering my spiritual journey, I think I'm doing quite well by not just turning around and going home.

A phone call from a friend - who I consider to be a very good witch - got me thinking. What does it take to be a good witch?

My friend had recently been in a workshop in which a lot of importance was placed on witches' lineages. It implied that to be a good witch it was important to have been initiated by someone who could trace their line of initiation back to some well-known figure in occult history.

My friend didn't feel this was necessary. She suggested it was more important for a witch to be actively working magic, helping others and embarking on their own spiritual journey.

Some witches say that you can't be a good witch - or even be a witch at all - unless you have been initiated into the craft by another witch. Ideally, you should have been initiated by someone famous, such as Gerald Gardner or Alex Sanders who were the fathers of Wicca, or at least by someone who was a member of their coven.

Some might say a witch is someone who regularly casts spells. They should also take part in the yearly cycle of magical rituals to honour nature, the changing seasons and the gods and goddesses. There is a school of thought that says if you don't do this, you aren't a very good witch.

Surely a good witch needs to know a lot and how better than by reading books and attending lectures? Modern witches, especially those in London, are lucky that we can go along to places such as Treadwell's bookshop to buy books on whatever occult subject we like and attend evening talks. We can gain knowledge of everything from ancient Egyptian rituals to the latest neo-pagan theory just by leafing through pages on the commuter train to work.

Maybe it doesn't matter how much you know, if you aren't out there making the planet a better place, you aren't a good witch. Whether you are a counsellor, a healer or a green activist weaving magic to save the world, you are using your craft for a practical and worthwhile purpose and that is more important than anything else.

For Wiccans, we are all on a spiritual journey. We grow from one life to the next, through reincarnation, learning more about ourselves and overcoming obstacles. In this way, personal development can be viewed as the most important thing a witch can do.

Some people are natural witches. They might not know it. It is quite likely they have never been initiated, but they can help an ill person feel better just by their presence, they can make any plant grow, they know what the weather will be without watching the forecast and they understand what those around them are thinking before they say it. They are certainly good at what they do, but are they witches?

Personally, I'm not sure how many of those things you need to be or do to call yourself a good witch. And does it really matter if, like me, you are a bad witch?

This is a really interessting subject! I am calling myself a witch, however, I am not initiated into any coven and I dont feel that it is necessary. (I have always been solitary and never fellt the need to join a coven.)And just to make you feel a little better - i have not been casting spells for at least 2 months now and the same goes for studying. I have tried to make people smile and feel better though, and in my eyes, that is what we are here to do.

And by the way - I loooove Treadwell's! Dont you just feel like transported back in time when you go there!

I have been reading your blog for quite some time now, and I have to say that I absolutely love it! You seem - like me - to be searching for magic in the ordinary everyday life. I like that!

Thank you for your lovely comment. I am glad you like my blog. I also agree that Treadwell's is fantastic.