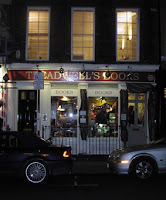 Tomorrow, 29 April, Treadwell's is holding a lecture on Arthur Machen and the occult.

Arthur Machen (1863-1947) wrote terrifying tales of the supernatural, including the gothic fantasy The Great God Pan.

As well as being an author, Machen was a mystic, actor, journalist and magician. He was a member of the Order of the Golden Dawn and lived in London. In his writing he transformed London’s streets into a city of visions and nightmares. Student of magic Ed Gauntlett will be talking about Machen’s occultism, mysticism and religious belief.

Entry to the talk costs £5 and it is worthwhile phoning in advance to reserve a place. Arrive at 7.15pm for a 7.30pm start.

If you know of any pagan events that you would like mentioned on A Bad Witch's Blog, email me at badwitch1234@gmail.com or leave a comment below.
Posted by Badwitch at 11:14