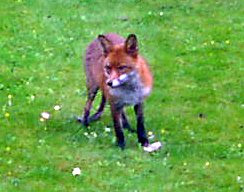 I have seen my local fox in my garden regularly over the past week. Yesterday it was chewing what looked like a meat bone it must have stolen from a rubbish bin, then it disappeared into its den by my back fence.

If you have been following A Bad Witch's Blog you will know that I often see foxes in my garden and that there is a fox hole in the leaf pile by my back fence. I am hoping it is a breeding den but I haven't seen any cubs so far this spring. Nevertheless, I am pleased to see the fox looking so healthy because it had some sore-looking bald patches on its behind last autumn.

In British folklore, foxes are depicted as cunning creatures that are often able to trick those who chase them. Anyone who has watched foxes in real life will know that they are clever animals and very good at hiding when they want to. I am pleased that my urban fox has learnt to trust me to some extent and doesn't immediately run away when she sees me.

In Aesop's fable The Farmer and the Fox, the trickster nature of the fox is used to show that revenge can rebound on the avenger. In the tale, a farmer caught a fox that had been stealing his hens. To get his revenge, he tied dry grass to its brush and set fire to it, then let the fox go. However, the creature ran into the corn fields, which were ready to harvest, burning the farmer's entire crop.

Foxes are also often depicted as witches' allies or familiars and there are many tales of shape shifting.

In the legend of The Black Fox of Dartmoor, a wealthy landowner coveted the smallholding belonging to an old woman who the local villagers visited for advice and herbal remedies. He was furious that although he owned so much property the tiny plot and cottage belonging to the old woman were not his too.

One night the cottage mysteriously burned to the ground and the old woman died. After she was buried, a large black fox was seen lying on her grave every night. The villagers were scared of it and the landowner decided to hunt it down with his horses and pack of hounds.

He chased the fox over hill and vale, but it was so fast he could not quite catch it. At last, he thought he had the fox cornered but, as it turned to face him, it transformed into the old woman. In one version of the tale, his horse reared in terror at the sight and the landowner fell, smashing his head against a boulder. In another version, the landowner and his hounds were magically transformed into a spectral hunt that guard the ruins of the old woman's cottage to this day.

Foxes appear in the folklore of many cultures. In early Mesopotamian mythology, the fox is sacred to the mother goddess Ninhursag. In Chinese mythology, fox spirits, or huli jing, tempt men into infidelity. In Japanese folklore, the fox-like kitsune is a powerful animal spirit (Yōkai) with a mischievous and cunning nature and can take human form.