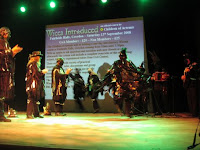 There are few things that would make me give up the chance of being outdoors on what promised to be the hottest day of the year, but Witchfest was one of them.

The festival for pagans and witches, run by The Children of Artemis, took place at Fairfield Halls, Croydon. It offered talks, workshops, a market, a bar and live music until late into the night.

I arrived in time for the opening blessing. This was supposed to have been conducted by pagan author Kate West, who was unable to attend due to illness, but Witchfest is the kind of event where everyone is eager to help make the day magical and a coven of CoA members stepped in to perform a short but lovely Beltane ritual.

The programme of lectures and seminars at Witchfest is excellent. With four or five different things on at any one time it is hard to decide what to do. To start, I had to choose between a wand-making workshop and a talk on spells.

I already have a handcrafted wand - made for me by a talented friend - so I sat down for Teresa Moorey's explanation of how spells work, with examples from history and modern day. Her theory, that spells are a way of manipulating the unseen through symbol and metaphor to help us make our desires a reality, was so in keeping with my own view on spellcasting that I scribbled down plenty of notes. I intend to type them up over the next few days and will post them on A Bad Witch's Blog.

After an hour of intense note-taking I was ready to rest and watch Hunter's Moon Morris (pictured). This is the same Morris group that organises Wassailing each January in the apple orchards of Middle Farm, in Sussex. They put on a great performance but I certainly didn't envy them dancing while swathed in heavy rags and tatters in this hot weather. They must be a fit bunch of guys.

A talk entitled Wicca The Untold History, by author and Wiccan high priestess Sorita D'Este, followed next. Sorita showed similarities between Wiccan rituals and passages from earlier magical traditions in an attempt to explain the roots of the modern Gardnerian tradition.

Rufus Harrington then gave a fascinating insight into the use of Enochian in magic. Enochian is called the language of the angels and was discovered by Elizabethan mathematician, astronomer and astrologer John Dee with the help of scryer Edward Kelley. Rufus's talk was called Elizabethan Magic and he explained that it is important to understand the Elizabethan cosmological view, which was Christian yet accepting of such things as astrology and alchemy, when trying to understand Dee's magical theories. Rufus talked about his own personal experience of using Enochian and how it can be powerful yet dangerous if you don't know what you are doing.

After several hours of listening and watching, I felt like doing something practical. Workshops on psychometry and then ritual dance were just the thing. After that, I was ready for a few drinks in the bar.

The rest of the evening offered music by Kitty Hudson, Katherine Blake, Inkubus Sukkubus and DJs in the bar. I'm not as young as I was and I felt tired after a day of learning, so I didn't stay to party the night away. Perhaps next time.

For information about future CoA events visit: http://www.witchfest.net/
Posted by Badwitch at 08:05