Midsummer and the solstice 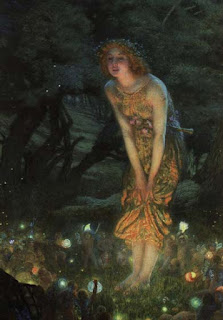 Midsummer is our favourite festival, according to a poll on A Bad Witch's Blog earlier this year.

For most pagans, midsummer takes place at the summer solstice, or the longest day of the year, on 21 June. The word solstice comes from the Latin sol sistere, which means "sun stand still". Afterwards, for the rest of the year, the days get shorter and the nights longer - although the warmest weather of the summer is still to come, with July and August often being the hottest months.

Midsummer's day is supposed to be highly magical, charged with the energy of the sun at its strongest. Folklore says that herbs gathered then for medicinal purposes are especially potent. It is also a time when fairy folk are said to visit this world, often playing pranks on mortals or luring them away to fairyland with their charms. If nothing else, it is an enchanting night to see Shakespeare's A Midsummer Night's Dream played under an open sky.
The summer solstice has been marked as a special occasion for thousands of years and by many cultures. Ancient Celts celebrated it with huge bonfires - although it seems lighting bonfires was something the Celts loved to do at almost any time to mark any special event. The Christian feast of St John the Baptist is also at the end of June, as is the festival of Li, the Chinese Goddess of light.

Wiccans sometimes call midsummer "Litha", which is one of the eight solar holidays in the Wheel of the Year. It is a festival to mark the marriage of the God and Goddess and is also a popular day for handfastings - pagan weddings, in which the couple to be married are symbolically joined by a chord around their hands.
Druids also celebrate eight key points of the cycle of the year. The sight of druids ritually celebrating the the sun dawning over the Heol Stone at Stonehenge, in Wiltshire, at the summer solstice is one of the best known images of modern paganism. Many would argue it is something that has gone on for thousands of years.
Links:
www.bbc.co.uk/religion/religions/paganism/holydays/summersolstice.shtml www.wyrdology.com/festivals/solstice/summer.html
www.wightdruids.co.uk/Eightyear.html
www.onestopenglish.com/section.asp?theme=mag&docid=145577
www.helium.com/knowledge/72026-astronomical-explanation-of-the-summer-solstice
http://en.wikipedia.org/wiki/Midsummer_nights_dream
Posted by Badwitch at 08:01

Summer has always been my favorite time of the year!I plan to have a simple private ritual myself--not any group/public activities in my area that I know of.

Solstice blessings to you to!

What a shame the sun has been obscured by grey clouds all day here in London.

Happy Solstice to all!