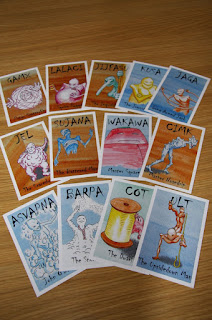 A rare set of divination cards has been brought to my attention by a friend who knows I love collecting such things.

Intriguingly called The Screaming Cards, they depict archetypes with unusual names such as The Upside Down Man (Ult), Long Armed Jack (Jaga), John O'Dreams (Asvapna) and The Joyous One (Kusa). Although there are only 13 cards in the set, they can be used for extremely powerful readings.

As with Tarot, the true origin of the cards is something of a mystery. But this is what the introduction that comes with the set states:

"This obscure cousin to the Tarot first came to prominence in England during the reign of Elizabeth I (1558 – 1603), where for a brief period such noted mystics as the astrologer John Dee used their ability to divine the codified messages conveyed by the cards to win favour with the Queen. Elizabeth herself was said to be much taken with the Screaming Cards, privately consulting her own pack on several occasions on matters of state, and some say the heart.

"Though popular belief considers the cards to be a product of Elizabethan England, the true history of these remarkable devices is far older, and lies much further
east than many suppose.

"The first known appearance of the Screaming Cards in Europe was in the 15th century, arriving along the Silk Road from India. They were carried and no doubt traded by merchants via Constantinople, Venice and Genoa, finally reaching the court of the Holy Roman Empire in Linz, where the Emperor Frederick III (1452 - 1493) was intrigued by the cards' supernatural ability to reveal his past, present and future."

As to why they are called The Screaming Cards, the pack's introduction offers this explanation:

"Our modern English name for the pack comes from the old German
(Frühneuhochdeutsch) word Schreiendekarten – shouting or screaming cards. But this term for the Linz pack is itself nothing but a phonetic corruption of the Hindi 'Shri' (Master) – a word in common use by Indian traders in the 15th century - identified as an early title used to refer to the inhuman (some say demonic) figures as they appeared in an earlier version of the pack, originating somewhere in northern India. This honorific 'Shri' would have sounded to a German-speaking ear like 'schrie' or 'screamed', hence Schreiendekarten and eventually Screaming Cards."

The modern version of The Screaming Cards is available to buy in limited numbers for £9.99. To find out more, email elysia@ntlworld.com

Call me suspicious, but I would be interested to see a reference that authenticates the account of the cards' history ;-)

I did say: "the true origin of the cards is something of a mystery." I suspect the real history of the cards is not quite what it states in the leaflet that comes with the set, but they are extremely powerful to use for a reading.