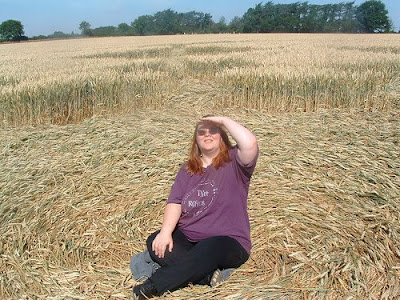 Crop circles continue to fascinate people. They are often amazingly complex designs that appear overnight in fields of crops without anyone witnessing who made them or how.

They first came to public attention on 14 July 1988, when one was spotted on Silbury Hill, the mysterious neolithic earth mound in Wiltshire. It was a simple pattern of circles that seemed to defy rational explanation. The Atlas of the Super Natural, published in 1990, said: "The walls of the standing crops defining the circle are perfectly sharp. The evidence clearly excluded human agency."

Since then, people have claimed responsibility for creating that circle and even shown how they made it, using planks of wood to flatten the crops. The website circlemakers.org is a forum for crop circle makers, describing the techniques used, and clearly proves that at least a large number of crop circles are man made.

Nevertheless, the debate still rages over whether all crop circles are of human construction. The website Crop Circle Secrets says:

"Crop circles are scientifically proven to be manifestations of energy under intelligent guidance. Over 80 eyewitnesses describe them to be made by tubes of light, in less than fifteen seconds, and this was once proved by a Japanese camera crew in 1990. The evidence for crop circles as a genuine phenomenon is found in Freddy Silva's book Secrets In The Fields."

Crop circles were around before 1988, and were given a variety of explanations. An English woodcut from the 17th Century, called The Mowing Devil, shows a demonic figure creating a circle in a field. In 1966, an Australian farmer claimed to see a flying saucer hovering over a sugar cane field. When he went to investigate, he found a flattened circle below where he said he saw the craft hovering. In the early 1980s, mysterious flattened circles in crops growing in Surrey where blamed on a freak storm.

The early reports described shapes that were simple circular patterns. Since then, crop circles have become increasingly more elaborate.

Last month, timesonline reported a massive pattern in a field in Wiltshire that has been identified as a mathematical symbol depicting the first 10 digits of Pi. Debate rages over whether it is the work of aliens trying to communicate with us, or a group of clever engineering students prepared to get up at dawn, which is 4am in mid June.

The picture above shows a friend of mine sitting in a crop circle. She said: "I tried sitting in the middle and waiting for the mothership, but it never came for me. I guess even aliens get fed up with spirographs pretty quickly."

What do you think? Are all crop circles man made? Are those that currently defy explanation just very clever hoaxes or are they caused by something else - natural or supernatural? Could freak storms cause these patterns or are aliens trying to tell us something using complex symbols in our fields? Is there some other paranormal explanation - perhaps mischievous imps or fairy folk with a knowledge of maths?

Leave a comment on my blog to have your say. If you have any pictures of crop circles, email them to me at badwitch1234@gmail.com

It would be somehow ironic if the crop circles were actually made by little green men with a plank of wood on rope :-).