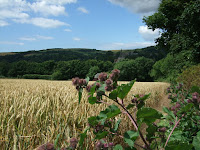 The glorious weather of the past few weeks has turned the fields golden and ripened the fruit on the trees ready for harvesting – at least as much as a city witch like myself could tell from a lovely country walk the other day.

In times gone by, when we were reliant on each year’s crops to have enough food to last through the winter and into the next spring, the start of the harvest was something to celebrate.

In the UK, the harvest festival or the festival of the first fruits takes place on August 1. It is often called Lammas, which many Christians say is a corruption of Loaf Mass, meaning a mass said to celebrate the loaves of bread baked from the first corn. Another possible origin is Lamb Mass, which was the name of a ceremony held at the Cathedral of St Peter in Vinculus, in York, England.

Many pagans prefer to call the festival Lughnasadh, named after the Celtic god Lugh. Some pagans consider him to be one of many mythological sacrificial gods who died to ensure others might live, and relate a tale that Lugh battled with the earlier agricultural god Crom Dubh to win corn for his people. However, the festival of Lughnasadh more accurately honours the funeral of Lugh's foster-mother, Tailtiu, who is said to have died after clearing the plains of Ireland for agriculture.

Some harvest festivals hark back to this with the burning of a sheaf of corn – or perhaps a corn dolly – as a symbolic offering of a the first of the year’s harvest, given as thanks to the spirits of the fields. This might also be associated with early methods of freeing the grain from the straw by controlled burning, although it was frowned upon because animals need the straw in the winter.

Lammas was often the traditional time for summer fairs, where workers were hired to bring in the crops, livestock was sold, disputes were settled and everyone generally had a good time. Matchmaking was also done at this time and in some regions couples could agree to a trial marriage for the duration of the fair, at the end of which they would either wed or part and go their separate ways.

Another old belief is that Lammas is the time to undo any fairy mischief done on May Day, such as rescuing those snatched by the wee folk or switching a changeling child back for the human infant.

Many traditional Lammas customs survive throughout England, Scotland, Wales and Ireland, including fairs, bonfire celebrations and feasts. A good source of information about these is A Chronicle of Celtic Folk Customs: A Day-to-day Guide to Celtic Folk Traditions

I have read that Lammas is also the time of ridding yourself from past anger and hurts is that true?I'm fairly new to to this path and value information from people who have more knowledge than i do.

Lammas is traditionally a time when disputes were settled and things that were wrong put right in one way or another. Sometimes old disputes cannot be settled amicably, so putting them behind you and getting on with the rest of your life, symbolised as the harvest, is a good thing to do at Lammas.