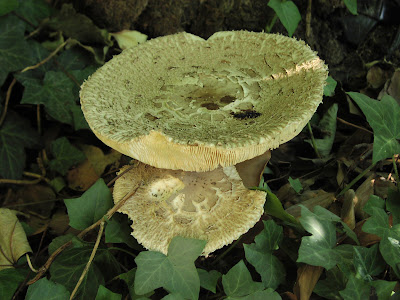 Autumn is the season for mushrooms and there seem to be a lot about this year, perhaps because it has been such a humid summer.

Many people are fascinated by fungi because some are edible, some are deadly poisonous and some are reputed to have magical or hallucinogenic properties. Eat a wild mushroom without being sure it is harmless and you could be making a very unfortunate mistake.

If you decide to go foraging for fungi and don't have an expert with you, make sure you keep each different specimen in a separate container and have them identified before you consume any. There are plenty of books on how to identify edible mushrooms, including How to Identify Edible Mushrooms

and The Easy Edible Mushroom Guide

, but only ever eat a mushroom if you are absolutely certain of its identity and that it is safe. 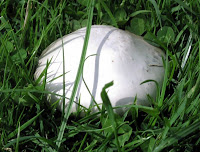 If you have collected wild mushrooms for the first time, cook them well, only eat a small amount to start with and keep a raw specimen to one side in case you have an adverse reaction. Never eat a mushroom that looks as though it has gone off.
There is plenty of folklore surrounding fungi. Fairies are said to dance in mushroom rings and you should not step inside one in case you anger the wee folk - or are whisked off to fairyland for 100 years. The ancient Egyptians believed mushrooms were the plant of immortality and, as such, could only be consumed by royalty.
Mushrooms have also long been associated with witches, particularly the spectacular fly agaric, with its red and white spotted cap. This fungus contains very powerful psychotropic compounds and is thought to be one of the ingredients of the witch's flying ointment, used to give visions and out-of-body experiences. However, the fly agaric can also be poisonous, particularly if you do not know the correct amount to take, so it is best to leave this mushroom where it is if you find one in the woods.

My study of mushrooms and history led me to your web page.

Much of our understanding of Mesoamerican religion has been pieced together from Spanish chronicles and prehispanic and Colonial period manuscripts called codices. The Spanish missionaries who first reported the mushroom rituals were repulsed by what they perceived to be similarities to holy Christian communion. As a result, they made no attempt to record the rituals in detail and banished all forms of mushroom use.

Despite all the evidence of the religious use of narcotic mushrooms recorded in the Pre-Columbian codices and described in the Spanish chronicles, the archaeological community, with the exception of ethno-archaeologist Peter Furst, has been surprisingly reluctant to recognize and accept the important cultural and religious role played by hallucinogenic mushrooms in ancient New World society. Both my father, archaeologist Stephan de Borhegyi, and R. Gordon Wasson, a well known ethnomycologist, noted this fact over a half century ago. Though both added enormously to the body of published ethnographic and archaeological information on the subject, and a few mycologists (Gaston Guzmán, 2002:4; 2009) have continued through the years to make important contributions to the scientific literature on hallucinogenic mushrooms, the subject remains to this day relatively unknown and absent from the literature on Mesoamerican archaeology, art history, and iconography. It is also noteworthy that almost four centuries elapsed between Spanish chronicler Fray Sahagun's description of narcotic mushroom rites and the rediscovery of this cultural phenomenon in the 1930's.
My research which is a continuation of my father's and Gordon Wasson's work suggests that narcotic mushrooms, and in particular the Amanita muscaria mushroom, considered by some to be deadly because it provokes thoughts of suicide, was believed to be a divine portal to underworld resurrection and rebirth. When mushrooms were eaten or smoked their powerful effect (depicted as the Olmec snarl) transformed the user into a were-jaguar. This mushroom-inspired religion of underworld jaguar transformation emulated their creator god Quetzalcoatl, who delivered mushrooms, fire, and maize to mankind. As the Evening Star he follows the sun each night into the underworld and with his ritual axe decapitates the underworld jaguar (a metaphor for the underworld Sun God). Deified through self-sacrifice and reborn as baby jaguar, he is resurrected by the Morning Star, which as an eagle, carries the new born Sun into the sky.
The mushroom imagery I uncovered in Maya vase paintings pertains for the most part to the mushroom species known as Amanita muscaria. I have already stated my belief that mushrooms were eaten raw in pairs or ground into a paste or powder, mixed with water, and drunk from a vase. The resulting concoction was imbibed during sacrificial death rituals based on the belief that underworld decapitation and jaguar transformation would lead to resurrection and rebirth.
Carl de Borhegyi

Hello...Looking for info concerning a spell in which concerns one releasing spores from a mushroom therefore unleashing bad luck upon one self. I believe it's one used by another primarily involved with the Black arts.

I do vaguely recall hearing something like that in a talk once, but I can't remember the details. Good luck with your research. Let me know if you find it as I am always interested in traditional magic, even though I don't personally use magic to curse people myself!

Hi, I woke up today tho find cut up mushrooms on the floor of my room. They looked cooked. Does this mean anything? If so what should I do?

Well, I think I might want to investigate how they got there. If it wasn't a person who left them there, maybe it was an animal. My cat once brought me in a lump of cheese!