Review: The Key to Camelot 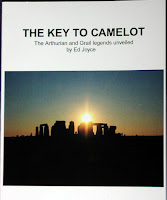 "Where is Camelot and what is the Grail?" were questions that pagan author Ed Joyce had been wondering ever since he was a child.

With a lifelong a love of the legends of King Arthur and the Cornish landscape surrounding Tintagel Castle and Merlin's Cave, Ed was inspired to write a book, The Key to Camelot. In it, he analyses the Arthurian tales and comes up with some interesting speculation that might provide answers to those questions.

Ed suggests that the real King Arthur, Merlin and tales of Camelot and the Grail existed in the early Bronze age. As evidence for this, Ed suggests that many sites carrying the name Arthur are pre-Roman, and he looks among them for potential sites for a historic Camelot.

The concept of Arthur pulling a sword from a stone and anvil also ties in with descriptions of how early Bronze age people might have made a sword. This process, and the advanced weapons it created, could have seemed magical to those who had never seen them before.

Ed also looks at descriptions of the Round Table from the earliest versions of the Arthurian tales. The Vulgate Cycle states:

"Now, good sir, in the meadow you saw that there was a hayrack, by which you should understand the round table. For even as the spaces of the hayrack are marked off by wooden bars, so there are pillars at the round table which separate the seats one from another."

Ed comments: "The description of the pillars is similar to that of a stone circle where there are pillars of stone." Pointing out that many references to The Round Table describe it as being in the open, and very large in size, Ed suggests that The Round Table may have been a stone circle. This could mean that the Arthurian tales refer back to ancient uses of stone circles as important meeting places.

Ed also argues that the Holy Grail of Christ and the golden Grail of King Arthur were originally two different things, that became merged in Christian versions of the Arthurian tales. He points out that several golden cups have been excavated from pre-Roman burial sites, and these items must have had great importance to the people of that time and could have found there way into legends. One of these, and a possible contender for being the true Grail, is the Rillaton cup, which was excavated from a barrow on Bodmin Moor, in Cornwall. It is in the British Museum, but don't bother going there on the off chance of seeing it, as it is not currently on display.

I like Ed Joyce's presentation of the Grail myths, but felt that the book would have benefited from from more statements of historical and archaeological sources and, in particular, academic references.