The school down Witches Lane 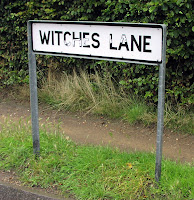 These days it isn't unusual for parents to move home so that they are in the right catchment area for their children's education. So, if you fancy sending your youngsters to a school in a place called Witches Lane, you would have to move to the borough of Sevenoaks, in Kent.

Amherst School, Witches Lane, Riverhead, Kent TN13 2AX, was founded in 1831 by Lord Amherst as a village school to teach children of all ages.

But, despite its wonderfully named location, Amherst School is not an establishment for young witches and wizards. It teaches English, maths, science and other National Curriculum subjects rather than how to cast spells or even such things as potions, divination and defence against the dark arts.

There are also some beautiful houses on Witches Lane, but you would need to be quite wealthy buy one even with the current slump in property values. The most recent home to be sold there went for £479,500.

Witches Lane is in a beautiful part of Kent, in Chipstead Village Conservation Area, but I have not yet been able to find out exactly how it gained its unusual name.

A large house called Chipstead Place, with extensive lands bounded by what is now Witches Lane, was built in Elizabethan times. An 1835 map of Chipstead Common - the area that now includes Amherst School and Witches Lane - shows no built development around the common. There was at that time a sandpit to the north, fields to the south and east and the start of a road on the west boundary to the route now taken by Witches Lane.

Exactly when and why Witches Lane was named is still a mystery - but one I am trying to solve. If you know anything that could help, leave a comment below or email me at badwitch1234@gmail.com