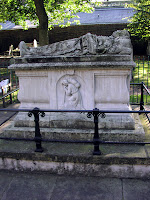 London is one of the world's most haunted cities and this is the best time of year for ghost hunting. Here is The Bad Witch's Guide to the haunted hotspots of this ancient city:

Berkeley Square: The house at number 50 is one of Britain's most famous haunted houses and several people were reputedly driven insane or killed by whatever lurked there. It is now occupied by Maggs antiquarian bookshop and although no supernatural activity has been reported in recent years, you could always pop into the shop and see for yourself.

The British Museum: This museum has such a huge collection of antiquities that it would be surprising if none of them had a spooky reputation. One ancient Egyptian mummy case is reputed to be cursed and to have caused 13 deaths. Entry is free, so why not wander around and have a look? Even if you don't see a ghost you can enjoy looking at the wonderful display of occult items, including John Dee's Black Mirror, in Room 1.

Cemeteries: Highgate cemetery has so many ghosts and spooky legends that anyone serious about exploring London's most famous haunts has to visit. Part of the cemetery can only be seen on guided tours but quite a bit is open to the public. Bunhill Fields is one of London's oldest cemeteries, and is open to the public. Its famous residents include John Bunyan and William Blake. Although they are thought to rest quietly in their graves, strange mist has sometimes been seen rising from other ancient tombs.

Drury Lane: The spectral Man in Grey is said to haunt the upper circle of the Theatre Royal. Others still walking the boards after their demise include comic performer Dan Leno and Irish actor Charles Macklin.

Hampton Court: Cardinal Wolsey and two of Henry VIII's wives - Catherine Howard and Jane Seymour - are a few of the famous people haunting the royal palace. It is open to the public, although entry is not free.

Lambeth Palace: Anne Boleyn, another of Henry VIII's wives, can be heard here pleading with Archbishop Cramner for mercy before being taken by water to her execution.

Newgate: A black dog is said to haunt the site of London's notorious prison. You might prefer not to go looking for this one though, because seeing it is a portent of doom.

St Paul's Cathedral: The ghost of a clergyman is said to haunt the western end of the cathedral. Even if you don't see him, you might hear the rattling of the keys he is said to carry on his wanderings.

Temple: The Inns of Court are haunted by Sir Henry Hawkins, the Hanging Judge. Look for him at midnight, if you aren't too scared.

The Tower of London: This is probably the most haunted place in England and has so many ghosts it would get a bit crowded if they all turned up at once. Thomas a Becket, Henry VI and Anne Boleyn are just a few of the famous spectres you might see. The tower is open to the public, but is not free.

Whitechapel: Polly Nicholls, Jack the Ripper's first victim, is said to wander the site of her murder as a restless shade with a halo of light.

Wilton Row: The Grenadier Pub claims to be the most haunted pub in the world, but if you go there after visiting some of those other haunted places, you may prefer to find a different sort of spirit than the spectral kind behind the bar.

More details can be found in The Good Ghost Guide, which is a gazetteer of over a thousand British hauntings.

Ghosts and How to See Them