Burley: A village of witches 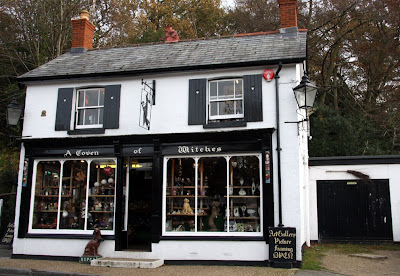 Burley, a pretty little village in the New Forest, southern England, is famous for its witches. This began during the 1950s, when witch Sybil Leek moved to the area and opened a shop called A Coven of Witches at the Cross, Burley, Ringwood, Hampshire.

Sybil claimed to come from a family of hereditary witches dating back to the 16th Century. She also published several books on witchcraft, including Moon Signs

and Cast Your Own Spell

, and did much to raise people's awareness of the craft by talking about it to the press. 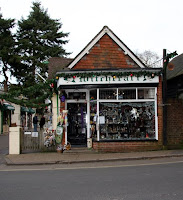 Although Sybil moved to America, where she died in 1982, her shop in Burley is still flourishing. Burley's witchcraft heritage certainly seems to have helped it prosper. As well as A Coven of Witches, other shops including Witchcraft and The Sorcerer's Apprentice have become well established selling occult paraphernalia and gifts with a magical theme.

The village also contains a cider farm, some excellent restaurants and a tea shop called The Black Cat. It is definitely worth a visit if you are in the area.

Sybil Leek was not the first witch to be associated with The New Forest. Gerald Gardner, who founded Gardnerian Wicca, the best known tradition of witchcraft in the UK today, claimed he had been initiated to the craft by New Forest witch Dorothy Clutterbuck.

Nowadays, some people believe that these modern witches' claims to direct initiatory descent from an ancient witchcraft tradition might be a little exaggerated. However, they have certainly been extremely influential in promoting the craft as it is known today and have also left their own fascinating heritage in the lovely village of Burley, in England's New Forest.

Cast Your Own Spell

Interesting, I may have to visit there, where I live there is no wiccan or new age shops, I have to get everything online. The book shops stock a few witch books, but not many, a nightmare!

Burley is definitely a great place to visit - shame there are no wiccan or new age shops near where you live.

I know, I live in Sunderland, there is one shop which is possibly new age, which sells mainly ornaments, and another 'Hippy' shop which sells a few craft pieces, but nothing worth buying, so I shop online, but try to make do with what I already have, apart from books, I am an utter bookworm, do you know any good fiction books based on witchcraft?

The Sea Priestess is a classic fiction book based on witchcraft.

I've also just finished reading The Deptford Mice trilogy, which is really for children but is wonderfully pagan.

I know Burley well and have visited that particular shop many times. The range of products is really amazing.

Hi badwitch:-)
I love Burley,that and Avebury are my 2 fave places in the world!
Off to the forest tomorrow in fact for a week :-)
Sybil Leek named the shop "The Coven of Witches" it wasn't her shop AFAIK(if that's what you meant by "opened")

Thanks for correcting me about tthe shop - have a fantastic week in the forest!

no probs BW :-)
Thankyou,i will endeavour to have the best time ever! xx

I love your blog and your comments about Sybil and the village of Burley. I know Sybil's last student and nurse, Chris Jones. A couple of corrections though: Sybil didn't open Coven of Witches; she merely gave the shop its name. She did, however, at one time own an antique shop on High Street in Burley. Also, her book "Moon Signs" is not a Witchcraft book, but an astrology book. Her most famous Witchcraft books are "Diary of a Witch", which was an international bestseller and got her on numerous TV shows--including the Today Show with Barbara Walters--and "The Complete Art of Witchcraft", arguably Sybil's best work. Anyway, thank you for this site and the terrific photos!

i visit burley every year and everytime i go, it still makes the hairs on my back come to a stand

We were in the New Forest last week - we drove though Burley in the daytime it just appeared as a really nice little village but when we drove back though at night its seemed to have taken on a whole new aura. Not frightening but weird. Unfortunately I was unable to go into 'The Coven of witches' shop. So Im checking it out online.

Dame Sybil Leek initiated Dr Frederick LaMotte Santee aka Lord Merlin who initiated the late Lady Phoebe Athene Nimue around 1967 here in Pennsylvania. She taught and initiated me and i am the 3rd* HPT of their Coven of the Catta http://covenofthecatta.wordpress.com/ of the Horsa line. You can go to our blog and see pics of Sybil at the covenstead from the local newspaper, and on the About page is a link to a free PDF download i wrote about the Coven. The only other person Sybil seemed to have initiated in the US was Grace Kemelek http://covenantofrhiannon.org/horsa.htm who unfortunately did not live to pass the lineage on. Soulfire who commented above confirmed this. BB Shawnus

I am 5th generation of Burley witches we like to keep a very low profile even now as many locals think that we are evil or bad this is far from the truth we still practice in the woods at night (Not skyclad) as do our local druid friends and we work for the greater good following the teachings of the Horsa coven still today, teachings handed down from one generation to the next. There was always a coven in the village even before Sybil Leek drew attention to the fact, in reality she was asked to leave the forest coven due to unwanted attention she drew from the press at the time

I've met a particular local woman who described the atmosphere of the woods at Burley as "evil" so I know where you're coming from, I however find the atmosphere to be wonderful, but mine is a pagan perspective.

i am currently making a documentary about the witch stories in burley, i will be filming in burley next week and doing interviews with witch enthusiasts. if you would like to be filmed please contact me finnstokes@hotmail.com

I'm not interested in being filmed next week, but thanks for asking.

I am looking to get into witchcraft or Wicca . I live in the Southampton Hampshire area and as far back as I can remember Wicca has always interested me , but the problem I have is that im dyslexic and I need someone to help me with this . Is there any classes or people i can go to for help in teaching me Wicca. I wrote a moment ago but I don't know if I done it right . I would be very grateful for any help . Blessed Be

Rikki, the Kitchen Witch School of Witchery shouldn't be too far from you, and it runs online courses too: http://www.badwitch.co.uk/2015/04/magic-school-arc-of-goddess-online.html

I seem to have stumbled into the wrong web page. However as I'm here I might as well see if you can help. My question is.....where the hell is Philip? I can't find him. Last seen in the area of the New Forest, mumbling something about being fed up of fake accusations, and threatening to headbutt people into log piles.
If you hear anything let me know.

Hi, I've got a really strong calling towards this practice and know it's not a passing interest. I want to be solitary but come up stuck at what's the right thing to practice. There's so much out there I don't think most of it's true. I'm a spiritual person and don't want to mess myself up with rubbish. Or a online course for I'd be making it up. Can anyone recommend any suggestions please? Thanks

Read, read and read some more! Only you can know where you need to go, you'll feel it in your gut if you're on the right track.

Used to take my dogs for a walk in burley everyday. Use to visit the shops but seem they have taken the tourist trade more important than the actual importance of the craft

Does anyone know if Sybil Leeks Coven is still practicing in the New Forest. Or any off springs of it.

Many thanks
Sam McCabe

I doubt they'd come out to you if there were. There are Covens all over Britain

I have had a member of a downline coven of Sybil's called the 'Catta' contact me from America who wants to know if there are any more downline members still practicing in the New Forest so I am putting it out there if there is anyone still practicing from the original teaching of Sybil Leeks can you privately email me so I can connect you with the other Catta members in America as Sybil moved there. samantha.mccabe@sky.com
Many thanks.