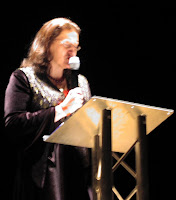 As today is the anniversary of the initiation of Aleister Crowley into The Golden Dawn, on 18 November, 1898, I thought it was a good time to post on my blog the notes I took at Melissa Harrington's talk on Aleister Crowley at Witchfest last week. It was entitled Aleister Crowley- the Man, the Myth and the Magic.

Melissa first talked about the life of Aleister Crowley, then about his magic and how that links into paganism and witchcraft today, and also about her personal experience of using his material in rituals. Because it was such a long and interesting talk I am going to post it on my blog in two parts, over two days. This first part is mainly about the Crowley's biography and life work.

Melissa said “Aleister Crowley liked to call himself 'The wickedest man in the world', although his background as a child was in The Plymouth Brethren – a fundamentalist Christian sect.

“Aleister Crowley was born in 1875. His father died in 1887. Crowley went to Cambridge University, but didn't study hard and didn't get a degree, although he read a lot of books on psychology, philosophy and history and met influential people such as Gerald Kelly and George Cecil Joneswho were in the Hermetic Order of the Golden Dawn. Crowley was initiated into the Golden Dawn in November 1898.

“In his autobiography, Crowley said he wanted a career in which he could be great and considered becoming a politician but decided to make his name in magic. That became his life's work.

"Crowley died at an old age having done drugs all his life. He got into drugs because he had asthma, but experimented with other drugs to open the doors of perception and was always pushing at the edge. He was a forerunner of the 1960s with his experiments in sex and drugs and magic. He did everything that someone training someone today would tell them not to do, but it gained him many visions.

“His visionary style harks back to Biblical Revelations, which he would have been taught as a kid. Particularly the The Vision and the Voice,which is about his Enochian work using the angelic magic system of John Dee. It is from the Book of Revelations that he took his name, The Great Beast, because he identified with the Antichrist. Apparently his mother had once called him The Great Beast when he was a child, and the name stuck. He was quite a beastly beast too.

"He met Allan Bennett in 1899, who became one of his important teachers. They lived together and embarked on major magical work. Bennett taught Crowley yogic techniques.

"Crowley did not remain in The Golden Dawn due to a schism in the group. After he left, he travelled a lot, including Mexico, Egypt and later China. Crowley was well known in mountaineering circles for tackling tough ascents. However one of the things that affected his reputation was when he lost some men on an expedition quite late in his life.

"In 1904, he married Rose Kelly , Gerald Kelly's sister, and they went on honeymoon to Egypt. There, Rose said that he needed to do a certain magical working. In this working, he received his holy books, The Book of the Law

. The Book of the Law was dictated to him by a preternatural intelligence on April 10, 1904. It eventually became the backbone of everything he did.

"In 1906 he went to China with his wife and baby, but sent them home and carried on by himself. On the journey back the child died and that was pretty much the end of his relationship with Rose. She eventually divorced him.

"He lost another daughter 20 years later, his child with Leah Hirsig when they were in the commune at Cefalu, in Italy. There was high child mortality in those days but you could say they were also somewhat careless with their children in this pioneering, adventuring lifestyle. It also took a toll on his women companions, but it spurred Crowley on to writing because that was that year he wrote 777

, which remains a good reference book on magic.

"Looking at his life story, we see him wandering everywhere and doing everything. Certain things stick out such as the year 1909, when he visited the Sahara with Victor Neuburg working on The Vision and the Voice. It is powerful poetic stuff, but when you look at his experiences and his visions, you can see that he is getting the visions he is expecting to get in many ways, although he writes them brilliantly.

"He was a prolific writer – poems, stories, articles, books. One book he wrote, Magick in Theory and Practice

, was written for a beginner and to be accessible. When you read it today you realise it is not accessible or suitable for a beginner, but it is less obscure than some of his other stuff.

"What I would say about working with Crowleian stuff is different from what others would say. There is such a vast body of literature that he generated and so many different avenues that can be followed.

"In 1910 he met concert violinist Leila Waddell, who was one of his scarlet women who survived and left him. She was involved in creating The Rites of Eleusis, which was a series of mystery plays that were put on in London. Around that year and 1911 he was in a circle of people who were literary or theatrical, wealthy, famous and morally libertines. One of his friends was Isadora Duncan, who had two illegitimate children but who was accepted by society idea of the time. So, Crowley's idea of freedom of sexuality was not as ground-breaking as you might think when you look at the people he was hanging out with.

"Crowley called called himself The Word of the New Aeon. He thought he was the prophet of a new way, a new religion, a new way of being and that he had received the holy book for that age.
In a way he really was the prophet of the new age that came. So many people claim that they were influenced by Crowley.

"In 1912 Crowley was invited to join the Ordo Templi Orientis, the Order of the Oriental Templars. Women inspired him. In 1913 he was managing a troupe of dancing girls in Moscow, during which time he was having so much sex and passion he managed to write several books including Hymn to Pan and the The Book of Lies

, which were all major Crowley works.

"He had dissipated away all of his early wealth but somehow managed to continually come into money and had an inheritance of £3,000 in 1919. In 1920 he founded the Abbey of Thelema in Sicily. If you read the Diary of a Drug Fiend

you see Crowley had a fabulous idea of an abbey based on work by Rabbelais, where nobody would have to get up until they wanted to, they could do anything, sex would be free, everything would be free.

"It is a slightly unrealistic vision, but it was also it is very much the hippy ideal. Crowley's followers did try hard to live this way and had the idea that no one should refuse themselves sexually. It was tough on some people, especially Leah Hirsig who put thousands of pounds into the community, got pregnant by several people and ended destitute.

"It was crumbling before Crowley got expelled by Mussolini after the death of one of his acolytes, Raoul Loveday. This was written up in a book called Tiger Woman by Loveday's wife Betty May. In it, she said that when she entered the monastery, Crowley would greet people by saying “Do what thou wilt shall be the whole of the law.” They were supposed to reply “Love is the law, love under will”, but she replied “Good evening.” She was one of several people who stood up against Crowley, and many of them were women.

"From the biographies you see Crowley couldn't stand people resisting him. He introduced practices such as cutting yourself every time you said 'I', but Crowley was the exception who was allowed to say 'I'.

"You can see what they were trying to do but it never really came true. Thelema was filthy with poor sanitation and then Loveday's death damaged its reputation further. After Crowley was expelled Leah tried to keep it going but couldn't in the end. In the 1930s, Crowley lost a libel case, which bankrupted him.

"In the 1940s he met Gerald Gardner and invited him to run the OTO in Britain, which he never did – instead founding Wicca. However, within the Wiccan Book of Shadows there are bits of Crowley's work."

After covering Crowley's life and works, Melissa talked about her own background in Crowley's magic. However, because this has been such a long post, I am posting the second part tomorrow.

The Book of the Law: 100th Anniversary Edition

777 And Other Qabalistic Writings Of Aleister Crowley, Including Gemetria & Sepher Sephiroth

Magick in Theory and Practice

The Rites of Eleusis

Diary of a Drug Fiend

Such an interesting life! I don't know much about Crowley, and what I do know is influenced by a strict Christian childhood. As was mentioned, Crowley was human, but I think he can be admired for his boldness, individuality and commitment to original thinking.

I totally agree with what you say. I always used to go along with the popular idea that Crowley was just an evil man. Having learnt more about him, I still think he must have been a horrid person in many way, but his influence on paganism and our current understanding of magic is immense.

Hear the great beast himself in a Recording of Aleister Crowley,
from 1920. Crowley reads excerpts from The Gnostic Mass.