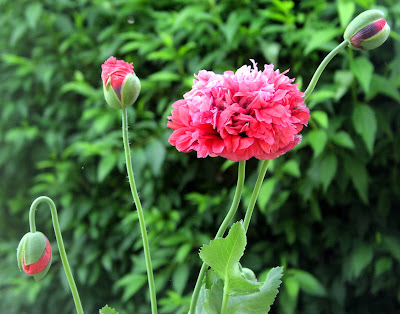 Tomorrow is Remembrance Sunday, when Britain holds remembrance services for those who have died in war. It is always held on the Sunday closest to British Remembrance Day, which is on 11 November and is the anniversary of the end of World War One. To commemorate the signing of the armistice, a two-minute silence is held in the UK at 11am on the 11th day of the 11th month of the year.

The red corn poppy has become a symbol of Remembrance Day because the battlefields of France bloomed with them after the fighting churned up the ground and the flowers also proliferated over the graves of the fallen. Each year, artificial poppies are sold by the British Royal Legion charity to raise money for war veterans.

With its blood-red colour and short life – the blooms last only a day – the poppy is certainly a suitable flower to symbolise the loss of young life.

However, poppies had been associated with death and battles long before World War One. In the battle of Waterloo it was said that poppies on the battlefield had grown from the blood shed by soldiers. The flowers were considered suitable offerings for the dead as far back as ancient Greece and Rome. The twin gods Hypnos and Thanatos, the Greek deities of sleep and death, are often depicted crowned with poppies

In folklore, poppies symbolise sleep as well as death, and peering into the black centre of a red poppy is a folk remedy for insomnia. The opium extracted from poppies has, for thousands of years, been used to induce sleep and numb pain. Records from ancient Mesopotamia, 5,000BC to 4,000BC) describe the use of the poppy to relieve suffering as well as for euphoric effect. They were also used by the Egyptians, Greeks, Romans and many other cultures all over the world.

There are hundreds of different types of poppy, and the drug opium is only extracted from the opium poppy, although many poppies have analgesic and sedative properties. People eating edible poppy seeds on cakes and bread have sometimes come up positive in drug tests, so you do need to be careful. Opium is a Class A drug in the UK.

You should never take any herbal products without consulting a qualified herbalist.

very informative details thanks for that, nice article

This is really interesting, You're a very skilled blogger.
I've joined your rss feed and look forward to seeking
more of your magnificent post. Also, I've shared your
site in my social networks!

I'll immediately grab your rss as I can not in finding your email subscription hyperlink or newsletter service.
Do you've any? Please permit me realize so that I may just subscribe.
Thanks.

I've got some suggestions for your blog you might
be interested in hearing. Either way, great blog and I look forward to seeing it improve over time.