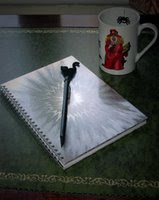 It is exactly a year since I first started writing A Bad Witch’s Blog.

“I confess, I'm not a good witch. I don't mean I'm a wicked witch. I don't curse people or boil up their entrails in a cauldron. I mean I'm a lazy witch - a technopagan who likes things to be easy. I'd rather find stuff quickly on the internet than spend hours reading old books. So, time for a new beginning. A Bad Witch's Blog is my attempt to collect some links to pagan sites and to put together my musings on pagan-related events and life in general. I might even surprise myself and review a few books.”

Well, I’ve certainly done that last thing. In the past year I have read quite a few books and written about them on my blog – something I intend to continue doing in the next year.

As well as being my blog’s first birthday, it is still the season of Samhain, so a good time for a retrospective. Here are a few things I have written about in the year gone that I think are worth looking at again:

On 27 November, I posted a photograph of a fox that I had seen sleeping in my garden. Over the year, this vixen returned many times, made a den and in the spring gave birth to a pair of cubs. I still see the fox family from time to time. Hopefully there will be more cubs to write about next year.

At midwinter, 21 December, I posted a guided meditation on the element of Earth, involving a journey underground to meet the Lord of Earth. I followed this up with three further meditations on the elements of air, fire and water at appropriate times over the wheel of the year.

On 28 December, I wrote: “The days between Yule and the New Year are traditionally good for making predictions about the future,” and I suggested a way of recycling used greetings cards into a deck of divination cards. I still have my own deck made this way and have added to it with birthday cards and postcards. This original idea is something I am particularly proud of!

In January, I moved my website from www.badwitchblog.blogspot.com/ to www.badwitch.co.uk/ because I wanted to have a UK domain name and one that was easier to remember - although you can still access the blog from both addresses.

On 14 February, Valentine’s Day, I gave in to my inner Goth and shunned the pink tat in the shops to visit the grave of William Blake in London’s Bunhill Fields cemetery. It is a peaceful place and well worth visiting. Every time I have been there I have seen flowers left at the resting place of England’s greatest visionary poet.

By 12 March, spring was definitely on the way and although the weather was still cold, a bush of beautiful camellias was in bloom near where I live and an elderly oriental lady reminded me of their spiritual significance.

On 21 April, I walked through bluebell woods on a lovely spring morning. These flowers are only in bloom for a few shorts weeks, but when they are, the world seems that little bit more magical.

In May, I went on holiday to the Isle of Islay, in Scotland, to enjoy a festival of malt whisky and music and also to visit some wonderful ancient sites including Cultoon Stone Circle. I would thoroughly recommend both the island and the festival to anyone interested.

On 20 June, I wrote about another stone circle - one in London. Hilly Fields Stone Circle, is in Brockley, South London. It was built by local artists for the Millennium and every year has a midsummer fair.

July is a great month for summer days in the country and I visited Alfriston, in East Sussex, where I discovered some great shops for pagans, including the Bats Wing Apothecary, Much Ado Books and The Crystal Store.

In August my kitchen was invaded by slugs and I tried various ways to keep them out, including spells and charms. It seems to have worked.

On 9 September, I asked for any help in finding out the origin of the curiously named Witches Lane, in Riverhead, Kent. I had a few replies and discovered that it gained that name in the 1930s, having previously been called Sandy Lane. However, the reason it was given that strange appellation is still a mystery. Do email me or leave a comment if you know anything more about it.

In early October, with Halloween only a few weeks away, I tackled the dark and dangerous Cthulhu Mythos, looking at ways people are using the mythos for genuine magical workings and rituals. Scary stuff…

So, what will I be writing about in the year ahead? I certainly intend to continue to look at folklore and legends about the wildlife, plants and flowers that I see. I’ll be covering spells, rituals, magical lore and mythology. I hope to visit more pagan sites. And I expect I’ll be reading some more books.

If there is anything you would like to see covered on A Bad Witches Blog, or if you have any questions you want answered, leave a comment below or email me at badwitch1234@gmail.com

Felicitations! I want to thank you for setting up A Bad Witch's Blog and keeping it going. That something down to earth can be so frequently uplifting is something to be proud of and I hope you are.

Many enthusiastic hugs of the day!

Congratulations for being a bad blogging witch for a year already! It was great to write about your Islay whereabouts. Any plans on coming back? Have an Islay Malt tonight to celebrate!!

Janiejynx - Thanks very much indeed!

Ron - Yes, I do hope to return to Islay. It is a beautiful island full of lovely people.

Happy Birthday! And thanks for sharing your bad, lazy witchy ways with the rest of us.