Ama-Terasu: Goddess of the Week 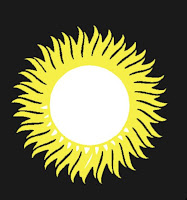 With the midwinter solstice this week, I felt I had to pick a solar deity as God or Goddess of the Week.

There are plenty of sun gods and goddesses to choose from but, pretty much at random, I have picked the Japanese sun goddess Ama-Terasu as The Bad Witch's Goddess of the Week.

My trusty Concise Mythological Dictionary says that the Japanese royal family claimed descent from Ama-Terasu, who looked after the welfare of the government.

In 7th century Japan, festivities were held each year to celebrate Ama-Terasu's re-emergence from a cave, where she was said to have been hiding.

"She had to take refuge in a cave following a bit of domestic violence. This caused a stoppage of sunlight and she had to be lured outside the barricaded entrance which involved a jewelled necklace and her reflection in a mirror. What Goddess can resist a little flattery? And she does have a sunny personality."

In my opinion, few women will turn down an invitation to go out along with a gift of jewellery :)