The Atlas of True Names 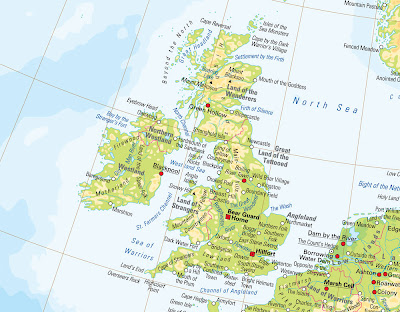 I've just seen details of a wonderful new series of maps that instead of showing the common names of places, reveals their names' true meaning.

The Atlas of True Names

reveals the etymological roots, or original meanings, of familiar terms on today's maps. For example, where you would normally expect to see the Sahara, the Atlas of True Names gives "Sea of Sand", derived from Arab es-sahra "desert, sea of sand".

The true names of 1,500 cities, countries, rivers, oceans and mountain ranges are displayed on these two maps - one of Europe and the other of the world. The maps also have an index of derivations, to help you look things up.

The maps are published by Kalimedia, and the company says on its website:

"Once the names have been taken back to their roots and translated into English, it is immediately apparent that our world has an extraordinary affinity with Middle Earth,the mythical continent where the events of Tolkien’s The Lord of the Rings are played out. Middle Earth’s evocative 'Midgewater', 'Dead Marshes' and 'Mount Doom'are strikingly similar in nature to Europe’s 'Swirlwater', 'Darkford' or 'Smoky Bay', as revealed by the Atlas of True Names."

Kalimedia says that countries and landscapes often derive their names from the characteristics of the people who lived there, so Great Britain is “Great Land of the Tattooed”.

I don't know if the atlas will help me solve the mystery of the origin of Witches Lane, in Kent, that I was investigating during the summer, but I'm keen to look at a copy and find out.

The Atlas of True Names, byKalimedia, is priced at £4.99.

Very interesting. Will have to check out the link.

Had to come back and say thanks for posting on this. I checked out the links and then began sharing all about the map with some friends. Last week, we had lunch and I was surprised by one of my friends with a gift--she had ordered the maps for me! I've been studying them ever since!

Glad it was interesting!