A cat and fox food fight 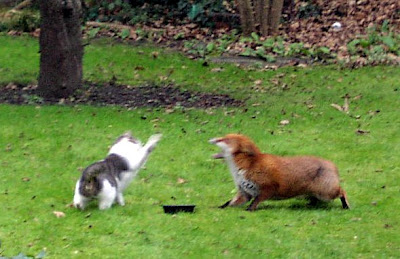 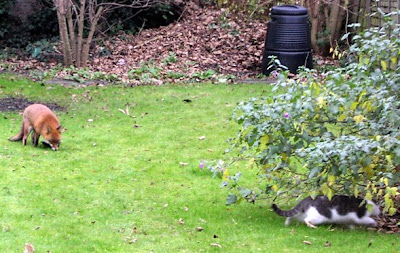 I've been putting food out regularly for Luna, the stray cat who has made her home in my garden, but the other day a fox arrived on the scene shortly after I had fed her.

The fox ran up to Luna and her food bowl. There was a great deal of noise from both animals and the fox got a swipe on the nose. After a brief fight, Luna retreated to the safety of a bush and left the fox to inspect the bowl. It was empty, much to the fox's disappointment I would think, as the animal then turned round and pissed over the bowl. 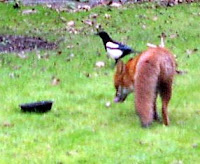 A magpie then also arrived on the scene, perhaps hoping to grab anything spilled in the fray.

I suspect that after the cold weather of recent weeks food is in short supply for creatures living outdoors, because cats and foxes rarely fight. I think I shall have to put a little bit extra out to help my wild friends during the winter months.

I chose not to break up the fight, because I think it is better to let animals sort out their differences without human interference - although I would have intervened if any of them had got hurt.
Posted by Badwitch at 08:01

Whenever I witness these things, I never seem to have my camera handy! I agree, it seems best to let the critters sort out things themselves.

Guess you'll have to wash that bowl, however....