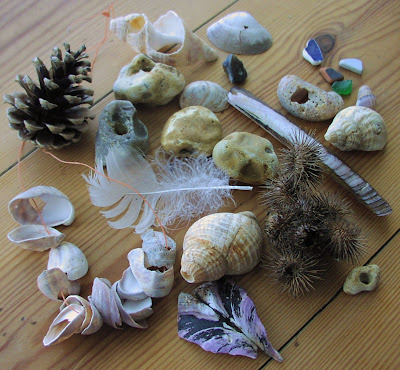 Sea shells, stones with holes, dried burs from a burdock plant, a pine cone, a swan's feather and shards of glass and pottery worn smooth by the elements - all things I've picked up over the past year as memories of days spent beachcombing or walking through woods and fields or by rivers and lakes.

Last Sunday, I decided it was time to let them go. I went to the beach, with all the items in a bag. It was a bright morning with a clear blue sky, but cold, and I had the shore to myself. I went to the edge of the sea, where the waves were lapping against the shingle, and threw each item in turn into the water. It seemed the right thing to do, and the right time to do it.

I suppose you could say it would have been more appropriate to do on New Year's Day, when everyone is trying to give something up to make room for change, but what people usually give up at the start of the year are things they regard as negative, such as smoking.

This was different. I wasn't wanting to forget or avoid anything, but my collection of curiosities had begun to gather dust on a shelf and by letting it go I was making room for new things to enter my life.

I don't find it easy to let go of things I value. I'm not kidding myself that a small heap of shells and pebbles is worth anything financially or even much in emotional terms, but I did feel a bit sad throwing these things into the sea, knowing I would probably never see them again.

Many years ago, in a meditation at a yoga class, I was asked to visualise something that was precious to me, then imagine putting it into a bubble and letting it drift up into the universe.

I couldn't do it.

It was at a time in my life when a long-term relationship was coming to an end, but I couldn't accept it was time to let go. But, however hard to you try, you cannot hold onto things forever. Trying to do so is difficult and rarely brings happiness.

I know that kind of letting go wasn't what the meditation was about. It was really saying that by sharing your joy with the world - symbolically letting it float into the universe - you were making this a happier place. You haven't lost that joy. It is still there - perhaps to be discovered anew, perhaps in another form, perhaps on another day.

That was why I cast my happy memories into the sea.

Walking back up the beach, I saw more stones with holes, more sea shells, more interesting pieces of flotsam and jetsam, transformed by the salty waves into strange items of beauty. I decided that I would start my new collection of curiosities with one thing from the beach. Almost immediately, I caught sight of a pebble that looked like a face and I decided that was it.

Yes, it does look a bit scary. I do accept that exchanging those happy memories for a stone shaped like Edvard Munch's The Scream could be considered a poor trade; possibly even a bad omen. But I'm not one for worrying too much about what the future will hold.

The Scream is a fascinating painting, supposedly drawn after Munch witnessed a volcanic eruption. He said:

“I was walking along a path with two friends - the sun was setting - suddenly the sky turned blood red—I paused, feeling exhausted, and leaned on the fence - there was blood and tongues of fire above the blue-black fjord and the city - my friends walked on, and I stood there trembling with anxiety - and I sensed an infinite scream passing through nature."

He also painted it at a time his sister was admitted to hospital with manic depression, and some people say his feelings about that are captured in this work of art.

Disasters and human suffering, need recognition as much as carefree days with blue skies and clear horizons, so I shall put my screaming stone onto my shelf for a while, until I decide to let that, too, go.