Talk on Politics & the Occult 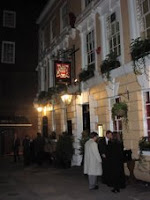 Secret Chiefs, London's longest running pagan forum, is starting its schedule of talks for 2009 with a look at the darker, political side of 20th century occultism.

Gary Lachman, founder of pop group Blondie, is also a expert on the occult and will be talking about his latest book, Politics and the Occult: The Left, the Right, and the Radically Unseen, at the Devereux pub, Holborn, tonight.

Gary's previous books include Turn Off Your Mind: The Mystic Sixties and the Dark Side of the Age of Aquarius

and A Secret History of Consciousness

. Politics and the Occult: The Left, the Right, and the Radically Unseen

looks at fascism and the occult, with chapters on European alchemical/hermetic scholars Julius Evola and Rene Schwaller De Lubicz and historian of religious experience Mircea Eliade.

The talk is on Wednesday 7th January and starts at 8pm, upstairs at the Devereux pub, 20 Devereux Court, off Essex St, London WC2. The doors open at 7.30pm. Ticket price £2. The talk is organised by The Secret Chiefs, London’s longest running pagan talks forum.
Posted by Badwitch at 08:01