Crocuses for love, insight and magic 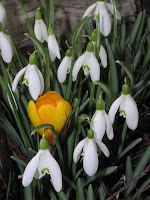 Crocuses, another early spring flower, have begun to bloom in my garden, their yellow buds just poking through the carpet of snowdrops. They seem to be a bit later than usual this year - I have often seen them in January. Perhaps the cold winter has delayed them until the end of February.

Crocuses are a magical flower, with powers to attract love and grant visions. If they had been stolen from, ancient Egyptians used to burn crocus with alum in a censor to learn the identity of the thieves, According to Cunningham's Encyclopaedia of Magical Herbs. The book also says that growing them in your garden will attract love.

Crocuses were sacred to the ancient Minoans, and a Minoan wall painting shows them being offered to a goddess. Crocus was also the name of a Greek hero, who was killed while challenging the god Hermes to a discus throwing competition. A flower with shiny stamens grew from his blood that spilled on the earth.

The crocuses in my garden are yellow crocuses, which are one of the most common varieties. There are about eighty species of crocus, some of which are poisonous. However, the most valued is the edible saffron crocus, which has been used as a dye and to flavour food for thousands of years. Saffron is time-consuming to produce and even today is very expensive.

The saffron crocus is thought to originally come from ancient Mesopotamia, but spread throughout the Mediterranean area. Historically, saffron was exported from Spain to the east - unlike many spices that came from the east to the west.

Saffron is rich in vitamin B2 and has been used as tonic, to soothe the stomach and detoxify the liver. Saffron was thought to be an aphrodisiac and was associated with child bearing in India and China. In Greek mythology, Gaea, the mother of Zeus, spread crocus flowers on her son's marriage bed to help his union with the goddess Hera be fruitful.

Some herbalists say that regularly eating small amounts of saffron crocus may delay the effects of aging and stimulate the brain.

Saffron is traditionally used to give Easter cakes, such Saffron Cake and the Russian Kulich, a delicate flavour and yellow colour. The website A Chef's Help states:

"Saffron is used extensively in bread-making around the Mediterranean, in Scandinavia and the Balkan region. It is the main ingredient in the French bouillabaisse, adds a distinctive red colour to Spanish Paella and to scores of rice and meat dishes of the Indian and Persian cuisine. In India saffron is added to wedding meals and pastries. This excellent spice was very popular on Crete up to the 17th century, however its use is currently restricted to Easter and religious festivities."

The crocuses that grow wild in the English countryside are not the type used to make saffron and should be left unpicked, for everyone to enjoy.

Fascinating! And I didn't realise saffron came from crocuses!