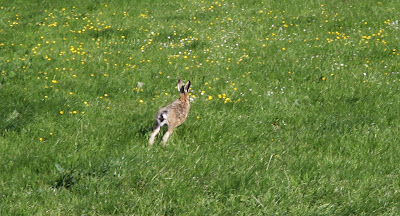 The other day, while out walking on the Sussex Downs, I briefly saw a hare - before it saw me and rapidly hunkered down to the earth and vanished.

Hares seem to be the master of the disappearing act - one moment they're there, the next they've gone - a bit like a stage magician's trick with a rabbit and a hat. But hares and rabbits are different creatures. Hares have longer ears and legs and that slightly odd look in their eyes that makes me think "Mad March Hare" as soon as I see one. Hares are members of an ancient species - the lagomorphs - which have been around for about 90 million years, meaning they hopped around the feet of the dinosaurs and long outlived them. Perhaps that is one of the reasons hares are associated with longevity.

Yet, sadly, hares are becoming increasingly rare in the English countryside, which combined with their ability to do a disappearing act, makes seeing one all the more special.

Although they may be elusive creatures in the wild, they are far from rare in folklore and mythology. Pretty much every culture around the world holds hares in high esteem and gives them mystical significance. There is also an astonishing amount of similarity in the tales about them, linking them to the moon, fertility, long life, craziness and sometimes trickery.

The hare's connection with the moon is easy to see on nights when the full moon is in the sky. If you look carefully, you can see the outline of a hare quite clearly on Earth's satellite.

In African mythology, the hare is a friend of the moon, but in many folk tales from continent it is also a trickster who loves to make fools of people. The Egyptian god Osiris was sometimes depicted with the head of a hare, and the hare represented the force of life. In ancient China, the hare was also associated with the moon and thought to mix an elixir of immortality. In the Indian sub-continent, both Hindus and Buddhists associate the hare with the moon, and see its shape there.

The hare appears in Celtic legends. The warrior Oisin wounded a hare in the the leg when he was hunting. He tracked the bleeding animal to a door in the earth. Going through this, Oisin found himself underground in tunnels that led to a marvelous hall. There he saw a beautiful young woman on a throne. Her leg was wounded, and she was bleeding.

In Roman mythology, the hare was a symbol of fertility and sex, and was associated with the goddess Venus. The Anglo-Saxon goddess of spring, Eostre, has a particular connection with hares. One legend says that Eostre found a wounded bird in the snow. Wanting to help she transformed it into a hare so that he could survive the winter. In the spring the hare laid a clutch of eggs, showing that it was still a bird at heart. The hare left these eggs as gift for Eostre. Some believe this tale is the origin of Easter eggs and the Easter bunny.

When I saw a hare on my walk the other day, I am glad it didn't hop in front of me because one common superstition is that if a hare crosses your path, it is a warning of danger. You should immediately turn back and not continue along your course, for it will only lead to disaster. Seeing as the pub, and my hopes of a beer and Sunday lunch, were at the end of my path, while the route behind me crossed several miles of windswept downs and clifftops, I would not have been delighted at having to retrace my steps!

Sailors considered hares to be bad luck even at the best of times and would not mention the animal while at sea. Others, however, believed that a hare's foot was a symbol of luck and carrying one would avert misfortune - although with hares in danger of becoming extinct in the UK, I would hope no one would do that today, or hunt one for any purpose.

In fact, in Ireland and some other parts of Europe in the past, it was considered extremely bad luck to hunt a hare, with the saying that to kill and eat a hare was like killing and eating your own grandmother.

The idea of hares going mad in March stems from their courtship rituals, in which they dance, box and leap into the air. According to some accounts, it was this behaviour that linked hares to witches. Apparently the animals' antics were thought to be exactly the kind of things witches got up to in their covens. Well, I have certainly danced at coven meetings and leaped over fires and broomsticks when the occasion demanded, but I can't say I have ever been to a coven boxing match!

European folktales abound of witches who could shapeshift into hares, or who had hares as familiars. Many modern witches consider the hare to be especially significant for them, perhaps because of old stories and also because of the animal's association with the moon, fertility and rebirth.

This is shown particularly well in a recent book, Luna Moon Hare: A Magical Journey with the Goddess

by Wendy Andrew. This delightful illustrated pagan story follows a hare through the wheel of the year. In it, Luna Moon Hare meets the gods and goddesses of the seasons and experiences the cycles of life through spring, summer, autumn and winter. It is a wonderful allegory that teaches the meanings of the various pagan festivals, the moons and deities associated with them, seen through the eyes of the magical creature, the hare.

Note: I took these pictures of hares on Islay, in Scotland, last May. I wasn't fast enough to photograph the one I saw in Sussex the other day.

Being very picky here - hares don't run to earth, as per your introduction, they live solely above ground, it's rabbits that run to earth!!

Thanks for including the Hare Preservation Trust link in your links list, we need all the help we can get.

Jane - Thanks for being picky! Indeed, hares live in nests - or forms - which are not holes in the ground. However, they are great at doing a rapid disappearing act!

I certainly should have made myself clearer in the intro.

I enjoyed your story of magical Hares, as an exgamekeeper I fully understood your description of the Hare going to the earth as meaning crouching down in its form.
I have witnessed Hares doing magical disapearing acts that defy logic many times.
A long time ago I vowed never to kill another Hare, my belief in their mystical powers and my pagan values would not allow it.
It is a shame that such a handsome and wonderful animal is still persecuted.
I'm truly sorry for my part in their declining numbers, even though I undertook the job with a heavy heart.