May Day and Jack in the Green 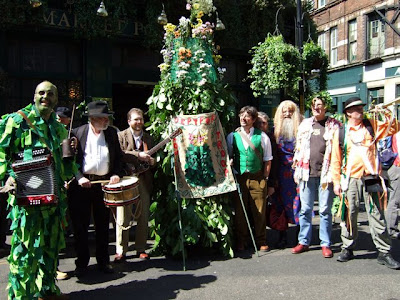 On May Day, the foliage-clad figure of Jack in the Green, accompanied by musicians and people in fancy dress, is now almost a familiar sight on the streets of London and other towns in southern England.

This spring tradition was revived in Deptford in the 1980s by the Blackheath Morris Men, after seeing a curious photograph of a Jack in the Green procession dating from the 1900s.

The Morris dancers weren't quite sure what the event in the photograph was really all about - the only caption on the photo being that it was The Fowler's Troop Jack in the Green - but it looked fun, and suitable for the season, so they thought they'd give it a go themselves.

It proved popular, and the revived Fowlers Troop and man dressed up in a wickerwork frame covered in leaves now returns every May 1, visiting various pubs in London's City and suburbs.

Since those early days, folklorists have delved into the history of the tradition to find out a bit more about it.

At first glance, Jack in the Green does bear a striking resemblance to The Green Man - a figure found carved in many old English churches and thought by some to be a relic of pre-Christian nature worship.

However, similarities in appearance aside, the current theory is that the tradition of Jack in the Green began only a couple of hundred years ago and developed totally independently of any earlier folklore.

"The Jack in the Green tradition developed from the 17th Century custom of milkmaids going out on May Day with the utensils of their trade - silver cups, pots, spoons - decorated with garlands and piled into a pyramid which they carried on their heads. By the mid 18th Century other groups, notably chimney sweeps, were moving in on the milkmaids' territory as they saw May Day as a good opportunity to collect money."

Whatever the true origins, it is hard to see Jack in the Green celebrations today and not feel you are witnessing something a little wild and pagan and full of the spirit of Beltane.

If you want to see it for yourself, Fowlers Troop will be dressing Jack tonight, Thursday 30 April , at the Market Porter pub, Stoney Street, London SE1 from 8.30pm. On May Day, The Deptford Jack in the Green will start processing from the Market Porter at 11am and return there later in the day.

Other towns also have Jack in the Green events, including Guildford, Rochester and Oxford.

One of the biggest is in Hastings, with May Day activities all over the Bank Holiday weekend, including the crowning of a May Queen, Morris dancing, live music and the release and symbolic slaying of Jack, to set free the Spirit of Summer.

The picture above is by Sarah Crofts and shows Fowlers Troop and the Deptford Jack in the Green on May Day 2007.