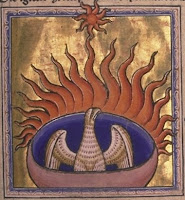 This wonderful phoenix comes from a 13th century illustrated manuscript known as the Aberdeen Bestiary.

It was the image offered at the start of the Phoenix Rising workshop, run by three wonderful pagan teachers and priestesses Vivianne Crowley, Caroline Robertson and Caroline Wise at Neal's Yard Meeting Rooms, London, on the May Bank Holiday.

The Bestiary's account of the phoenix is fabulous - in all senses of the word - if slightly contradictory. It says:

"The phoenix is a bird of Arabia, .... there is only one of its kind in the whole world. It lives for upwards of five hundred years, and when it observes that it has grown old, it erects a funeral pyre for itself from small branches of aromatic plants, and having turned to face the rays of the sun, beating its wings, it deliberately fans the flames for itself and is consumed in the fire. But on the ninth day after that, the bird rises from its own ashes.

"When it observes that the end of its life is at hand, it makes a container for itself out of frankincense and myrrh and other aromatic substances; when its time is come, it enters the covering and dies. From the fluid of its flesh a worm arises and gradually grows to maturity; when the appropriate time has come, it acquires wings to fly, and regains its previous appearance and form."

The workshop was designed to explore the magic, myth and symbolism of the phoenix through talks, discussion, visualisation, divination, talisman making, chant and ritual.

The morning began with seminars on various aspects of the phoenix - its mythology, symbolism and relevance in magical workings. The bird appears in cultures as diverse as ancient Egypt, ancient Greece, ancient China - where it is seen as female and associated with royalty - and Japan. A phoenix statue stands on top of the Kinkaku-ji temple, in Kyoto, Japan.

In magic, the phoenix is an important symbol. In alchemy, it represents death and rebirth within alchemical processes. Aleister Crowley wrote a ritual called Mass of the Phoenix, designed as a daily renewal rite to be performed at sunset. Wiccans use the image of the phoenix in seasonal rituals from midsummer to lammas, the time when the corn king is sacrificed and reborn in another state.

Facts about the phoenix are fascinating, but the workshop wasn't all lectures and discussions. We began our own practical and magical work with a lovely chant, which we also used as part of a ritual at the end of the day:

This was followed by a guided visualisation, in which we envisaged ourselves as a phoenix and went on a personal journey of discovery and transformation.

The phoenix is also associated with knowledge of the past and future, so in the afternoon we learnt how to use a form of divination known as geomancy, which involves interpreting random numbers of markings, traditionally made by poking a stick in the ground.

The workshop's teachings and exercises were brought together in a beautiful ritual at the end of the day, enabling us to use the energy of the phoenix to empower talismans that we could take away.

It was a fantastic workshop, packed with information and powerful magic. I know it worked, because I experienced the destructive but renewing energy of the phoenix the very next day, when I lost my temper and told someone who had annoyed me for some time what I really thought of them.

Often in our modern society we are taught that anger is a negative emotion. Well, it can be destructive, but it can also help bring about change. I felt so much better for getting my pent-up feelings off my chest and will be quite happy if I never see that person who annoyed me ever again. 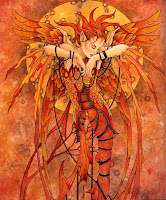 The beautiful picture to the left, also called Phoenix Rising, comes from a book I reviewed on my blog last week - Enchanted: The Faery and Fantasy Art of Linda Ravenscroft

The text next to it says:

"She is a painting of hope and encouragement, for anyone who has suffered. The Phoenix rises from the ashes; breaking free of all despair and sadness, never giving up, ready to start her life anew."

I firmly believe that when a symbol keeps cropping up in my life, it is something I should pay attention to.

Enchanted by Linda Ravenscroft is published by AAPL at £14.99.