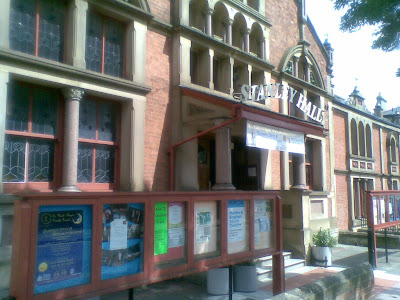 I popped in just for the day before setting of for my holiday, meaning I was there for the lectures and workshops but missed the evening entertainment. Its the second time I've had to miss the music and rock club at a Witchfest, and I'm determined I'll schedule my diary better next time, but nevertheless the talks and activities I did take part in were well worth it.

The day began with a simple yet powerful opening blessing by Welsh solo witch Tylluan Penry, who said she felt at home in the lovely arts & crafts style hall because it looked like a Welsh chapel.

With two and sometimes three lectures or workshops running alongside each other throughout the day, it is always tough to decide what to go to at Witchfest, but every talk I attended was excellent.

Mogg Morgan, a former member of the OTO, a founder of the Oxford Golden Dawn Occult Society and author of an excellent blog, gave the first talk in the main hall, on the subject of Golden Dawn Egyptian Gnosis. This was about the ancient Egyptian temple of Abydos, which was considered a pinnacle of magical teaching. After it was destroyed by Christians, many - including the Golden Dawn - have sought to recreate it on the astral plane and in the real world.

Archaeologist and witch James Bennett went even further into the past in the following talk, on Prehistoric Ritual and Religious Thought. He had studied prehistoric cave art first hand, at Chauvet, in France, and put forward theories of how the various animal depictions could have been created as totems, to represent the power of a tribe or family as well as to help give the hunter the power of the creature.

After lunch, Melissa Harrington gave a practical workshop on the Magick of Aleister Crowley. This included a demonstration of the Ritual of the Star Ruby, which Melissa had mentioned in a lecture she gave about Aleister Crowley at Witchfest last autumn. I found it interesting because it is a type of magic I know very little about.

I then went to hear Melissa's partner, Rufus, give a talk about Hermetic Magic. Hermetic magic is one of the best documented magical traditions, with material going back about 2,000 years. As Rufus pointed out, he was again talking about the historical roots of magic, which seemed to be very much the theme of the day. His talk included a short guided visualisation of entering a temple, which actually affected me quite strongly in that I felt a tightness in my chest during the meditation. And the temple I saw in my mind's eye made me think of a place I know in East Sussex - probably just me thinking about my holiday time ahead, but I am definitely going to go there because sometimes there are less-than-obvious reasons for things seen in visualisations.

James Bennett's second talk of the day was entitled Vampires. I have to say James is a fantastic raconteur and his stories of the undead had me shivering even though it was a warm day. If he gives the talk again anywhere near you, go to it - I recommend it.

The last talk I went to was on yet another magical tradition - an Introduction to Druidry by Damh the Bard. This was a brief look at the history of druidry, then an impassioned account of what druids actually get up to and believe in. I used the word impassioned because Damh is certainly passionate about his belief and I have to say his passion was infectious. I think I will definitely take the time to visit more druid events. They seem to have such fun and, to be honest, my own style of magic and belief is far more akin to druidry than to the highly formalised structures of the Golden Dawn, OTO, hermetic traditions and their ilk.

Thank you for your kind comments about my opening blessing ceremony. I thoroughly enjoyed Witchfest South, it was a great event and a wonderful opportunity to meet old friends and make some new ones!

Thanks for leaving a comment. I agree it was a lovely chance to meet people!

It was an extraordinary day. I felt the tone was a little darker than Witchfest usually is, but maybe this was down to my choice of talks. Lots of food for thought. I don't know much about hermetic magic either, but Rufus and Melissa's talks introduced it very well.

And the bands balanced the day out. After a challenging day it was great to just drink cider and rock out to The Dolmen.