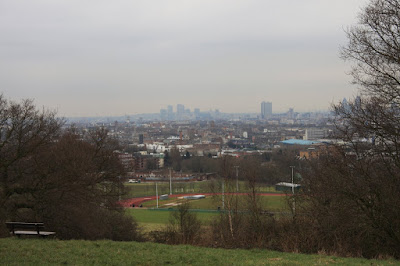 While I was browsing the internet looking for stuff going on in London this summer solstice, I came across something called A Summer Solstice Perambulation of the Prehistoric Mounds of London on the website National Psychogeographic.

Ever since I discovered Merlin Coverley's book Pyschogeography, I've been fascinated by psychogeography, which seems to combine two things I enjoy - going for a walk and immersing oneself in the occult. The idea is that by perambulating around a city you are also going on a kind of visionary journey as well as being an active force for change.

The author of A Summer Solstice Perambulation of the Prehistoric Mounds of London, whose name I can't see mentioned on the site, was inspired by the book Prehistoric London: Its Mounds and Circles

by E O Gordon to "perambulate between its founding sites - the great monuments that were at the centre of a thriving city long before the Romans rocked up", as a psychogeography solstice ritual.

It has to be said that opinions on Prehistoric London: Its Mounds and Circles

are divided. The Summer Solstice Perambulation website calls the book "criminally under-celebrated", but a review on Amazon's website says "There is almost nothing to recommend this book" and that it is based on "speculation without any evidence".

Now, I haven't read the book, but fact or fantasy, I see no reason why a walk between Westminster, The Tower of London, Penton and Parliament Hill shouldn't form the basis of great summer solstice psychogeography ritual, resonant in history even if some of that history is a bit spurious.

The psychogeographer initially intended the solstice perambulation to be "a grand ritual unifying the city led by the nation’s Druids". In the end, he just went on it with his sister. Nothing wrong with that though, and the two of them found pagan symbolism is everywhere.

There is Great Maze Pond SE1, which fitted in "with the pagan theme of the derive (mazes being created in oak groves and markers of places of druidic ritual)"; Tower Hill "where the severed head of Bendigeid Vran, first king of this island, is said to be buried"; "Mount Zion Chapel - redolent of a riff in Gordon that links the British Mounds to their spiritual cousins in Palestine"; and finally Parliament Hill Fields, where a druid was seen celebrating the solstice and there is also a modern monument to free speech.

If you want to try this summer solstice psychogeography ritual for yourself, why not take read the account on National Psychogeographic and have a go?

A midwinter solstice psychogeography trek, following the sun from its rise in East London to its setting in the west, is described in the book London Walking, by Simon Pope. Perhaps city perambulations are a great new trend in solstice celebrations, even if they aren't genuinely connected to the prehistoric past?

Prehistoric London: Its Mounds and Circles

is available to buy through Amazon

The photo shows a view over London from Parliament Hill

a journey through London psychogeographic myth and history

Thanks for the link. I will add the event to my events page!