Watching the ferns for midsummer magic 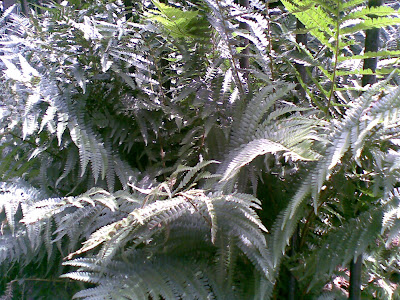 Ferns might seem a bit dull - just leafy things that never flower - but, according to folklore, they are among the most magical of plants, especially at midsummer.

"It was customary to 'Watch the Fern' on Midsummer Eve, when the plant put forth at dusk a blue flower, and a wonderful seed at midnight, which was carefully collected, and known as 'wish seed'. This gave the power to discover hidden treasures, whilst to drink the sap conferred perpetual youth."

And according to Shakespeare (Henry IV, act 2, scene 1 ), fern seeds - themselves invisible and only shed on Midsummer Eve at precisely midnight - also gave anyone they touched the power to "walk invisible".

This belief in the magical powers of the "invisible" fern seeds possibly came from centuries of bafflement over how ferns reproduced. Most plants produce seeds, but not ferns, which reproduce through spores so tiny they are hard to spot. They can be produced around midsummer and are shed as a light dust.

According to Encyclopedia of Garden Ferns

by Sue Olsen, it wasn't until the 19th century that people fully understood this. In previous centuries, Sue Olsen says:

"Speculation led to some fanciful theories, the most common being that the seeds, though there, were invisible. In turn, this brought forth some magical connotations."

And the magical connotations are certainly plentiful. Cunningham's Encyclopaedia of Magical Herbs

devotes an entire page to ferns. It says they have magical powers associated with rain-making, protection, luck, riches, eternal youth, health, exorcism and the fairy Puck. It adds that:

"Carried or worn, fern has the power to guide its bearer to discover treasures... If you ever find yourself in a spot covered with ferns, exactly at midnight, where no sound can be heard, Puck will appear and give you a purse of gold. When done intentionally, this is 'watching the fern'."

"During the Seventeenth Century it was customary to set growing Brakes [bracken]on fire with the belief that this would produce rain. A like custom of "firing the Bracken" still prevails to-day on the Devonshire moors. By an official letter the Earl of Pembroke admonished the High Sheriff of Stafford to forbear the burning of Ferns during a visit of Charles I, as 'His Majesty desired that the country and himself may enjoy fair weather as long as he should remain in those parts'."

In medieval times, dried ferns were often hung in homes because it was believed they would protect the dwelling from being struck by lightning.

Ferns have also been used for healing purposes to bind wounds and alleviate stomach ache.

However, if you do decide to go watching the ferns this Midsummer Eve, you might want to heed one other piece of folklore - that if a traveller treads on a fern, they will become confused and lose their way - perhaps even wandering off into fairyland, never to be seen again.

Note: This is not medical advice. Always consult a qualified herbalist before taking any herbal remedy.

There is a polish legend about Midsummer and a fern. At midnight you should go to the forest and looking for a fern's flower. If you find it - you'll have love and luck, you'll be rich, healthy and have a really god and long life ;-) But there is only one flower in every forest and its really hard to find.
I haven't found it, but actually I had not looked for. (Yhh... I'm not sure if I wrote it corectly! Propably I making a lot of mistakes :-P)
Blessed be!

Ferns are some of my favorite plants! At my last home, I started a shade garden with a mixed variety of ferns. I was always so excited when another tendril would unfurl!

I need to get working on my fern garden at the new home...

Vrede - that is a great story - and you explained it fine!

Riverwolf - ferns are lovely and shady, especially on a hot day like today.