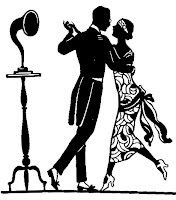 I was looking for some music for a 1920s' theme party, when I found a piece called Greenwich Witch by Roaring Twenties' pianist Zez Confrey, which seemed pretty good for dancing the Charleston.

I'm not quite sure which witch Zez named his number after, but I can imagine some slinky young thing in a black fringed dress and bob haircut twirling a long string of beads or sipping a cocktail and casting her spell on those around her in the borough described as "one of the coolest 'uncool' places there is in London", by blogger The Greenwich Phantom.

Zez apparently had a unique piano style inspired by a cat at his grandmother's house that he saw running up and down the piano keyboard. His first piece "Kitten on the Keys," released in 1921, was named after this and became a big hit. He went on to compose many other pieces in the same style.

If anyone knows what or who The Greenwich Witch really is, do let me know.

Love your blog...thanks for writing!

I recently came across your blog and have been reading along. I thought I would leave my first comment. I don't know what to say except that I have enjoyed reading. Nice blog. I will keep visiting this blog very often.