In the pink with a pinch of salt 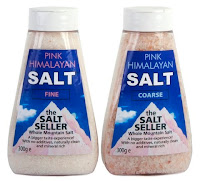 Long before anyone was worried about health risks, salt was a precious and magical substance used for preserving food as well as improving its taste and also for magical rituals

The Chinese have been mining salt since at least 6,000 BC, the ancient Egyptians used salt as a funereal offering and the Romans prized it so highly they traded luxury goods and fine wine for it - although the story that Roman soldiers were paid in salt is not actually true.

For modern witches, salt is an essential item on a ritual altar. Mixed with water it is used for purification and on its own it is used to represent the element of earth.

I was recently sent a tiny sample of pink Himalayan salt. Its producer, The Salt Seller, told me: "This pink salt is a high grade, ancient salt which was deposited several hundred million years ago in the foothills of the Himalayan Mountains."

The Salt Seller also said that the traces of minerals such as iron, which give it its delicate pink tint, not only make it healthier for you than regular processed salt but also make it taste nicer, and stronger, so you don't have to use so much.

Well, not being a dietitian I don't know about that, but the salt is very pretty.

A few months ago I was invited to a ritual to honour Venus, the goddess of love. We all had to bring pink things to put on the altar, to wear or to eat afterwards. I brought chocolate with strawberries in it and very nice it was too, but I do rather wish I had known about this pink salt. It would have been much more appropriate for a romantic Venusian altar than common table salt, which is usually plain white or even has a slightly greyish tinge.

Coming all the way from the Himalayas may mean pink salt doesn't have the greenest of carbon footprints, but it does make it seem more precious and rare - perhaps like salt would have been in ancient times.

As tempting as might be to sprinkle pink salt all over a plate of egg and chips, I think I'm going to save mine for the next ritual I'm invited to and see if it can help the magic flow.

If you want to try it, the Salt Seller's pink Himalayan salt is retailing at around £2.29 for 300g. For more details, visit http://www.thesaltseller.co.uk/

I very often use Himalayan Salt Crystals when I have a bath.

The packet tells me that they contain an astounding 84 essential minerals, that they stimulate blood circulation and hydrate skin - and believe me they do! The best thing is that you do not need to use normal soap or shampoo to wash yourself. You can see all the excess oil from your skin and hair in the water. They also do a wonderful job of relaxing sore muscles and relieving pain (which I am especially greatful for as I am currently suffering from severe sciatica).

I would highly recommend you invest in a packet and indulge one evening with some candles, then be amazed at how soft and shiny your hair is after ;)