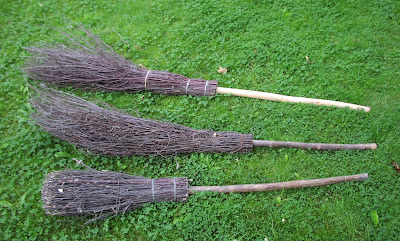 Like the Hogsmeade pub in the Harry Potter books

, I have discovered I am the proud owner of three broomsticks. This wasn't intentional - I discovered them when I cleared out my garden shed over the weekend.

I don't think anyone - even a witch - really needs three besom brooms. They might possibly need two - one for ritual use and one for sweeping up autumn leaves outside - but three is excessive - even if it is a highly symbolic number.

There is the Triple Goddess, the Christian Trinity, the Buddhist Three Jewels, the three Fates and the three Graces, three cheers, third time lucky, the Three Little Pigs and other fairytale threesomes. There is also the trio of maiden, mother and crone, which is sort of the reason why I have three besoms.

The oldest broom, at the front of the picture, I remember being used by my grandmother. As a child, I loved watching my grandfather cut the lawn with an old-fashioned long-handled scythe. He was proud of this traditional agricultural skill he had learnt when he was young, back at the end of the Victorian era, and he wouldn't dream of using a lawnmower.

It was the job of my grandmother - or my mother - to sweep up the cuttings using a besom. This I understand, was also the way it was traditionally done - and it was a job I happily took over to earn a little pocket money.

But decades of use by at least three generations of my family wore the old broom down to a stump and one cold autumn day in the 1970s my mother decided to replace it. Back then, you could still buy besoms quite easily from hardware stores and my mother set off to the shops wearing a cloak that was the height of women's fashion that year.

My father asked if she could pop into the library on her way back and pick up a book he had ordered. He didn't tell her it was a big tome with the title "Witchcraft" in large letters across the front. Not actually being a witch herself, my mother was not happy about walking along the busy high street looking like one, in her cloak with the broomstick in her hand and book under her arm.

The broom she bought - the middle one in the picture above - was nevertheless much better than the old one, which got relegated to the back of the shed where it gathered dust and cobwebs. My mother's broom was used for years in the garden, gradually becoming moulded to a shape that is ideal for sweeping grass and leaves, taking on the patina of age but with years of serviceable life left.

The newest broom is mine. I bought it at a country fair from a man who was making them, shortly after I was initiated as a witch. I use it to sweep my room before casting a circle and that is all it has ever been used for. It still looks pristine, because I don't attempt full Wiccan rituals on my own very often.

One of my goals this year was to declutter - hence the clearing out of my shed - so I think at least one of those brooms needs to find a new home. But which should stay and which should go?


What do you think?

Your ritual broom and your mother's broom should stay, I think. But whichever of your brooms needs a new home, it can some live with me. I'm in the market for a broom. I was going to buy one at A Coven of Witches earlier this week but they were too big for the car!

If you can only keep one broom then I'd keep yours. The older brooms have fantastic history but are tied to different people (your mother and grandmother). The newest broom has your stamp on it so I'd keep that one.

If I may, I'd suggest keeping all three as well.