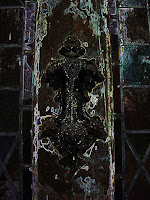 Doors that bleed might sound like the stuff of horror stories, but for one woman who lives in an old house in Sussex it is a dreadful reality.

Every autumn, shortly before Halloween, red, sticky goo starts to ooze from the cracks in one of her doors.

She said: "It's sticky like blood. If I paint over the weeping stuff, the paint won't take, but I don't like them bleeding."

The rational answer is that it is just wood sap seeping out of the knots in the wood. This can happen with new wood, especially if it has not been treated properly before being made into a door. It is easy to remedy by painting the fresh wood with knotting fluid - obtained from DIY stores.

But is this what is happening here? The bleeding door is old - it dates back at least a 100 years. And the problem only happens in the winter, when the nights are long and dark.

Another possible rational explanation is that it is old resin seeping out from the woodwork. Perhaps it happens more in winter because the house is damp and cold.

But I would be wondering why it only happens with one door? If all the doors date from the same time - perhaps when the house was built - what makes this door different?

It could be that it was somehow painted differently from all the others, but perhaps there is a more sinister explanation? I think I would want to find out what happened in the past inside the room behind the bleeding door.

An image comes to mind of an old horror movie starring Peter Cushing called From Beyond the Grave. Peter Cushing plays an antique dealer, but each item he sells comes with its own terrifying curse. It is a series of vignettes. In one entitled The Door, a writer - played by Ian Ogilvy - buys an ancient ornate door. He fits it to a stationary cupboard, but sometimes the door opens onto a different room entirely - one in which horrific events have happened and will happen to anyone who enters.

It has been quite a few years since I saw that film but, if my memory serves me correctly, the door was steeped in the blood of its victims, which gushed out as the writer took an axe to it.

I'm not actually suggesting the woman in Sussex takes an axe to her door - that sounds a bit too much like a famous scene from yet another horror movie - but if painting it with knotting fluid doesn't work, maybe she should consider replacing her bleeding door with one a little less scary.

Note: The door pictured above is just a spooky photo I took, it is not the actual bleeding door.

And just in time for Halloween! :)
I think there is probably a logical explanation for this, like the resin seeping out of a poorly treated door. Makes for a good story though...