The lost sphinxes of London 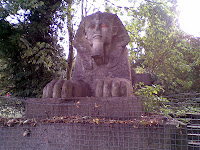 These sphinxes sit at the foot of a stairway to nowhere in a neglected and overgrown corner of Crystal Palace Park, in south east London.

Copied from ancient Egyptian sphinxes in the Louvre, Paris, they once they guarded the entrance to the mighty Crystal Palace - the iron-and-glass temple to Victorian splendour that originally housed the Great Exhibition of 1851 in Hyde Park, and was then moved to top of the highest hill in south London, on the border between the greater city and the county of Kent.

Crystal Palace burnt to the ground in 1936, leaving its feline guardians bereft of purpose and looking as though they had taken a left turn at Luxor and didn't know how to get back.

A sphinx is a mythological creature with the body of a lion and the head of a woman. They were usually placed as guardians at the entrances to royal tombs or religious or magical sites.

Their name is thought to either come from the Greek word sphingo, meaning to strangle, or the Egyptian word shesepankh, meaning living image. One can easily imagine the supposed fate of tomb robbers or trespassers attempting to get past these enchanted watchers.

A sphinx is said to have guarded the entrance to the Greek city of Thebes and, according to legends, it asked travellers a riddle that they had to answer correctly if they wanted to pass unmolested. No one knows what the original riddle was, although Greek hero Oedipus is supposed to have solved the puzzle he was asked: "Which creature goes on four legs in the morning, on two at mid-day, and on three in the evening - and the more legs it has, the weaker it is?" The answer being "man".

Sphinxes are also thought to be images of the Egyptian solar goddess Sekhmet, so it seemed appropriate that, as I got ready to photograph her English offspring, the late afternoon sun broke through the clouds overhead. A dazzling beam of light shone directly down the stone steps and in my imagination it seemed as though some golden cosmic portal might have opened in the grey autumn sky.

But, had I wanted to climb this stairway to the heavens, the way was barred. Steel wire criss-crossed the foot of the steps - perhaps simply a deterrent to vandals or perhaps for some other reason. So, wanting neither to snag my clothes while climbing a wire fence nor become supper for the lost sphinxes of London, I headed back through the park to make it home before darkness fell.