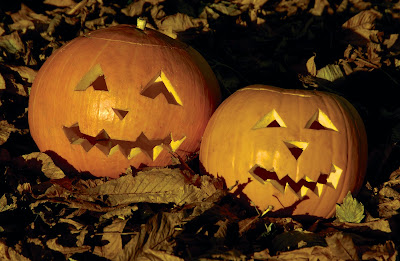 Pumpkin lanterns seem as much a part of Halloween as ghosties and ghoulies and things that go bump in the night, but when I was a kid pumpkins just weren't available in England. Oh, I'm sure you could buy them for a very high price at specialist shops, but not at the average greengrocers or veg market.

That isn't to say we didn't make Halloween lanterns - we certainly did - but instead of hollowing out pumpkins, we carved them out of turnips and swedes. And from bitter memory I can tell you that turnips and swedes are the most tough and obstinate vegetables to carve.

You have to hack at them sharp implements, brute force and the determination of a horror-movie psycho-killer - and even then the resulting lantern is usually best described as malformed.

But, when it comes to Halloween lanterns, malformed is probably good. The idea behind them is that by putting a monstrous face in your window or on your doorstep you will ward off any devils or other supernatural nasties, because they would not wish to go near anything that looked uglier than themselves.

An old name for an illuminated vegetable is Jack O'Lantern, supposedly named after an Irish trickster called Stingy Jack who somehow managed to con the Devil into paying for his drinks. The Devil, outraged at being fooled, refused to let Jack into hell after he had died, leaving him to wander the earth in darkness for eternity, with only a single coal to light his way.

Another theory about the origin of Jack O'Lanterns is that they were inspired by the mysterious flickering lights that are sometimes seen over peat bogs - also known as will-o'-the-wisps and corpse candles. According to folklore, these are lost spirits trying to lure people to their doom.

In parts of Somerset, Jack O'Lanterns are called Punkies, and Punkie Night is celebrated on the last Thursday of October.

Like Halloween, on Punkie Night, children go from door to door in a tradition similar to Trick or Treat. They carry around Punkies made from hollowed out mangel-wurzels - a type of large root vegetable often used as cattle feed - and demand gifts with the rhyme:

I might not live Somerset, and pumpkins might be very easy to buy in most supermarkets these days, but I think "mangel-wurzel" sounds so wonderful that next year I might just try to get one to carve into a lantern.

The picture above of two pumpkins was supplied by English Heritage, which is running Halloween events all over England this year.

Hello to all, because I am genuinely keen of reading this website's post to be updated on a
regular basis. It consists of good material.

I could not refrain from commenting. Very well written!

Do you mind if I quote a couple of your posts as long as I provide credit
and sources back to your webpage? My website is in the exact same area of interest as yours and my
users would genuinely benefit from a lot of the information you provide here.
Please let me know if this ok with you. Appreciate it!

By all means quote my blog and give me credit for the post!