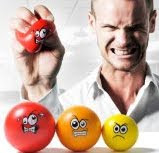 I admit I have an anger problem. When life gets tough, I get feisty.

By nature I'm a fighter, not a moper. I don't mean I am a violent person. My weapons are words - but they can sometimes be rather too sharp.

Life has been tough recently - I am having to care for my elderly mum and also my partner, who has a slipped disc - and I have got myself into some stonking rows.

The other day I realised that my mum had used up the last of her angina pills. I phoned the chemist to get her repeat prescription. He told me to phone the doctor's surgery. The doctor's receptionist told me to phone the chemist back; who tried to tell me the pills weren't on my mum's repeat prescription list (which they are) and then told me they couldn't get the pills for at least 48 hours. Somewhere along that chain of conversations I lost it.

I know I shouldn't have got angry - it really didn't help matters. But recognising that after the event isn't that useful unless it helps me change the way I behave in future. And it rarely does.

Dr Paul Hauck in his book Calm Down: How to Control Frustration and Anger (Overcoming common problems)

believes that anger is bad: it is bad for our health; it is unnecessarily distressing for us; and is ultimately counterproductive because people don't react well to anger and so are less likely to give us what we want rather than more inclined to be helpful.

Others think differently. In the book Women Who Run with the Wolves: Contacting the Power of the Wild Woman

there is a story in which a person's anger helps them catch a murderer - meaning that anger can be useful.

"Anger is an energy". Anger can lead us to take action, to stick up for ourselves, to right wrongs and to change the world.

Anger can also be a teacher - although perhaps more like the teacher we were terrified of at school rather than the nice one we liked.

After slamming down the phone to the chemist, I decided to try to chill out a bit by reading the book I am currently reviewing - The Hummingbird's Journey to God: Perspectives on San Pedro - the Cactus of Vision

. I was reading a chapter in which the author describes an amazing healing ceremony he underwent in the Andes under the guidance of a shaman. He describes the idyllic setting, the wonderful empathy he felt with his companions and his amazing spiritual revelations on an eight-hour vision quest after drinking a psychedelic cactus brew.

The subject should have fascinated me, but I found I was struggling to read it. Rather than helping me unwind, the book was making me feel even more angry.

I reached a point where the shaman asks those attending the ceremony: "Who are you?" It is one of those classic questions spiritual teachers ask, a question that seems simple, but is actually very difficult to answer. I found myself asking myself the question, and the answer that popped straight into my head was "I am a carer".

Immediately, I realised I had found the real reason for my anger.

I am a carer now, but it isn't what I ever wanted to be. Of course, I am many other things too - I am a witch, a lover, a worker, a daughter, a friend and a writer - but at the moment I am mostly a carer.

Being a carer takes up so much of my time. My own desires have to take second place to the needs of those I am looking after. They rely on me and I can't let them down. I'd much rather be free to fly out the Andes to take part in shamanic rituals if I wanted to - or even be free to go up to London to take part in rituals whenever I wanted to - but my responsibilities as a carer take priority. And that is what makes my blood boil.

But realising the true cause of my anger is helpful. I don't mean I am going to simply stop caring for those I love to gallivant off and have a good time, but I can start to get things into perspective. I can channel my strong feelings into trying to make my role less difficult. I can find out about the possibility of putting my mum into respite care for a couple of weeks, after my partner recovers, so we can both take a holiday. Maybe that idyllic place in the Andes isn't so completely out of reach after all...

Yes, anger is an energy, and now I know the reason for my anger, maybe I will put that energy to better use than losing my temper with those around me.

However, learning the lesson of controlling anger rather than being controlled by it isn't easy. I'm certainly not sure that I will ever master it.

The picture above shows the Anger Management Set

Calm Down: How to Control Frustration and Anger (Overcoming common problems)

The Hummingbird's Journey to God: Perspectives on San Pedro - the Cactus of Vision

Women Who Run with the Wolves: Contacting the Power of the Wild Woman (Classic Edition)

Interesting that your entry from Dec 2 has a similar theme to one I wrote on the same day, i.e. the relationship between anger and caring. Must have been something in the air!

Those books you mentioned sound good too, so I will check them out.

Yes, I suspect it was something in the air. I agree it seemed a full moon of very dark emotions, but then we are close to the midwinter.