The Holly King - or should that be Queen? 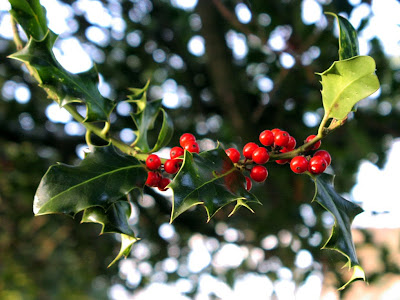 Historical accounts show that the Romans would decorate their villas with holly for Saturnalia, and it is likely that pre-Christian pagans all over Europe used the evergreen with its bright red berries to bring cheer into their homes in the bleak midwinter.

Magically, holly is said to have protective powers. Planted around your home, it will help protect all who dwell there from harmful spells, malicious fairies, evil spirits and even lightning. It brings good luck if you hang it inside at Yule and is also supposed to have the power to make your dreams come true.

Scott Cunningham says in his book Encyclopaedia of Magical Herbs

that if you gather nine holly leaves, wrap them in a white cloth and tie it with nine knots then place it under your pillow, what you dream of will become reality. If I was you, I'd make sure that cloth was quite thick though - holly leaves can be very sharp!

For Christians, those sharp leaves represent the crown of thorns that Jesus wore at his crucifixion, and the red berries represent the drops of blood he spilled to save humanity.

Many pagans believe the mythological figure of the Holly King rules over the half the year from midsummer to midwinter. At Yule, he fights with his ancient rival the Oak King, who defeats him to lead us back into summer, but at midsummer they fight once more and the victory is reversed.

According to some legends, the Holly King is married to the Ivy Queen -ivy being another powerful protective evergreen plant.

In magic and folklore, holly is considered to be male - which is actually a bit odd. Holly trees (or more accurately shrubs) are dioecious - meaning they can be male or female. Only the female holly bushes have berries, and they need to be close enough to a male bush in order for the flowers to be pollinated. So, if you have a holly shrub in your garden that never produces any berries, it is either a male or a lonely female.

After learning that, whenever I see a Holly King adorned with red berries I can't help but wonder if he is really an ancient pagan version of another Christmas tradition - the pantomime principal boy - a male hero such as Prince Charming who is played by a girl on the stage.

If you do bring holly into the house, however, it is worth noting that holly berries are poisonous and should not be eaten.