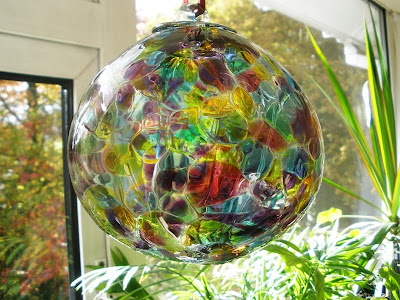 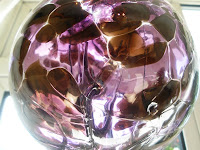 The glass baubles we hang on our Yule trees might seem just pretty ornaments, but they hark back to a magical tradition to ward off ill-doers and evil spirits as well as to predict the happiness of the household.

According to Cambridgeshire Customs And Folklore

by Enid Porter, witch balls were usually balls of coloured glass, usually blue, red or green, and were 6in-8in in circumference with a metal loop at the top so they could be hung in a window. The book states:


"One example in the Cambridge Folk Museum, from a house in Gamlingay, has the date 1798 embossed on the metal top. These balls were formerly 'watch balls' because they were closely observed, as they hung in the window, by their owners. If the bright surface remained undimmed, all was well; if it became clouded or tarnished, then sickness, death or some other disaster was thus foretold."

by John Michael Greer says witch balls are more often blue, green or violet and that they were used to banish the evil eye or other forms of hostile magic. It states:


"Some contain pins and needles to disperse negative energies while others are empty."

Art glass retailer Free2Garden sells beautiful witch balls like the ones in the pictures.


"When we explain the history behind the witch balls at our shows, customers are amazed that it is part of Britain's folklore, which we find very strange.

"The superstition behind spirit balls dates back over hundreds of years. A spirit ball, also known as a `witch ball' is said to ward off evil spirits and negative energy by capturing them in its interior glass strands. Unwanted spirits are mesmerized by the ball's colours and reflection and enter the ball, being caught inside and thus protecting the home.

"It has been suggested that Christmas baubles were descendants of spirit balls, helping to ward off any evil spirits and negative energy that would attempt to ruin your Christmas.

"The sunlight shines through the mouth-blown coloured glass, which sparkles beautifully when hung inside windows, or outside in trees and arches as garden features. They make a wonderful inspirational gift for Christmas, anniversaries, birthdays, bridesmaid gifts, leaving gifts, celebration of a birth, house warming gift or to simply remind someone that you're thinking of them."

Pagan resources website Pagan Magic (sadly no longer running) showed how you can enchant a Yule bauble to create your own magical witch ball:

The pictures and quote from Free2Garden are copyright Free2Garden and were supplied for the exclusive use of badwitch.co.uk and must not be used by any third party without the express permission of Free2Garden.

I'd like to thank you for the efforts you have put
in writing this site. I really hope to check out the same high-grade
blog posts from you later on as well. In fact, your creative writing abilities has encouraged me
to get my own, personal blog now ;)