Thorrablot - feasting in the face of hunger 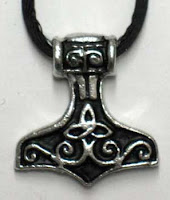 On the Pagan Calendar of festivals, January 20 is Thorrablot - an Asatru feast day dedicated to Thor, God of Thunder.

Thorrablot actually means "starvation time celebration". January is a harsh month and would have been particularly arduous in the frozen Viking lands of centuries past. With food scarce, the winter storms would have made every day a fight for survival, but those tough Icelanders loved to show their strength against all challengers - in this case against the threat of starvation.
Mind you, I think one might need to have the strong stomach of northern Viking warrior to enjoy some of the items on the Thorrablot menu. As a wussy western Wiccan, I would indeed have to be starving before putrefied Greenland shark (hákarl), ram's testicles cooked in lactic acid (súrsaðir hrútspungar), singed sheep's head (svið) and blood suet (blóðmör) looked appetising
Nevertheless, the food festival of Thorrablot is still popular in Iceland today and you can find details of events on tourist websites.
For followers of Asatru, however, raising a glass of strong drink (or several) in a toast to Thor on Thorrablot is just as important as eating putrefied fish. So at least there is something I can join in with for the celebration.
The picture above shows a Thor's Hammer amulet, available from Pagan Magic for £6.99. In Norse mythology, Thor's hammer Mjolnir is one of the most fearsome weapons and has reputation of being able to defeat any challengers. Followers of the Asatru religion often wear a Thor's Hammer amulet as a demonstration of their faith.
Links
http://members.iquest.net/~chaviland/calendar.htm
http://www.pagan-magic.co.uk/shop/product_info.php/norse-thors-hammer-p-4886?ad=badwitch
http://www.badwitch.co.uk/2008/09/goddess-of-week-elli.html
http://www.pagancalendar.co.uk/event.php?zodiac=astrological&getdate=20100119&tz=Europe/London&id=186
http://odin.org/faq.html
http://www.icelandtravel.is/about-iceland/annual-events/thorrablot-viking-celebration/
http://www.godchecker.com/pantheon/norse-mythology.php?deity=THOR
Posted by Badwitch at 08:01

I was offered putrified shark and pressed lamb's testicles in holiday in Iceland. I couldn't face either, but my husband gave them a go. Apparently the testicles tasted sour, but were just about edible. The shark tasted of ammonia and was disgusting.