The Dark Monarch - a magical exhibition 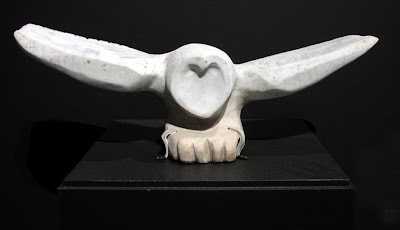 If you are anywhere near Eastbourne, in Sussex, within the next month, make a point of visiting The Dark Monarch exhibition at the Towner Art Gallery. This explores how folklore, mysticism, mythology and the occult have influenced British art in the past 100 years.

The most disturbing piece on show is Damian Hirst's The Child's Dream. Essentially, this is a pickled pony in a tank - or rather a dead foal that has been transformed with incredible skill into the likeness of a unicorn with golden horn and hooves, trapped in a gilded coffin.

On a purely visual level it is absolutely beautiful. On a conscious level, this jars with the knowledge that what you are seeing is an embalmed corpse. I think this dichotomy is what makes it interesting as art.

And, although the display is shocking, I am sure this little creature died of natural causes. I can't help but think that entombing it in this way, to inspire awe and wonder, is probably more environmentally friendly - and more reverential - than disposing of the corpse at some industrial deadstock incinerator.

The Child's Dream is appropriate as a central display in an exhibition about magic and mythology, which also involves an awareness of symbolism that works on many levels of reality and imagination.

The exhibition is named after an infamous book entitled The Dark Monarch: A Portrait from Within by writer and artist Sven Berlin. This was published in 1962, but then withdrawn after a libel suit. I haven't read that book, but I understand it is a fictionalised account of the artist community in St Ives, Cornwall, which Sven was part of and which was rife with bitter arguments. It was his depiction of the characters that got him into trouble.

Sven was heavily influenced by the work of the St Ives School and the Cornish landscape, with its ancient rocks and stones.

One of the pictures in The Dark Monarch exhibition is Lanyon Quoit, by Bryan Wynter (left), which shows one of Cornwall's ancient megaliths. There are also sculptures by Barbara Hepworth and works by Sven, including his sculpture Owl in Flight, photographed above. 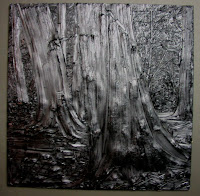 Sven was fascinated by nature and folklore and, after leaving St Ives, lived as a Romany with his wife in the New Forest. The second gallery at the exhibition shows mysterious woodland landscapes such as Black Square by Gillian Carnegie (right).

Looking at the art I've mentioned so far, you might be forgiven for thinking the exhibition, apart from the golden unicorn, is all gloomy-and-brooding black-and-white.

That is certainly not so. Vibrant colours leap out at you from fantastical visions of other realms. This includes The Fairy Feller's Master-Stroke by Richard Dadd - one of best-known fairy paintings - and a huge contemporary digitally-produced view of a fantasy world by John Russell. 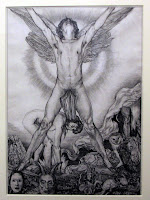 In a second exhibition hall (pictured below), The Dark Monarch delves deeper into occult philosophy with work such as The Dawn (right) by Austin Osman Spare. Austin Osman Spare was a hugely influential British magician who used automatic drawing and developed theories about automatic writing and the use of sigils.

An occult library forms part of the display, containing books on magic and surrealism owned by painter Ithell Colquhoun. You can see it in the background of the picture at the bottom.

The last part of the exhibition is called The Mantic Stain. Mantis is the Ancient Greek word for prophet, and prophecy is the theme here. Many of the exhibits seem futuristic, or use every-day items in ways that seem out of context or ritualised. This includes work by conceptual artist John Latham, whose work includes collages of burnt, painted and cut-up books to demonstrate the unreliability of traditional knowledge.

The Dark Monarch exhibition is probably the most important display of British occult art in recent times. Although it is themed around Sven Berlin's book, it is far more than an homage to this influential artist and writer. It brings together under one roof some of the most famous works by British artists connected to the supernatural, fantastical, magical and occult.

The Dark Monarch exhibition is on at The Towner Art Gallery, Devonshire Park, College Road, Eastbourne, BN21 4JJ until 21 March. It is open Tuesday - Sunday from 10am - 6pm. For more details, call: 01323 434660 or visit the website http://www.eastbourne.gov.uk/leisure/museums-galleries/towner/exhibitions/

It was originally put on at the Tate St Ives.

The exhibition catalogue The Dark Monarch: Magic and Modernism in British Art

is fast becoming rare. There were a few copies left at The Towner Gallery for £30 when I visited last weekend and some rather highly-priced copies are available through Amazon

. However, if you do want a copy I would recommend buying one before they all disappear. 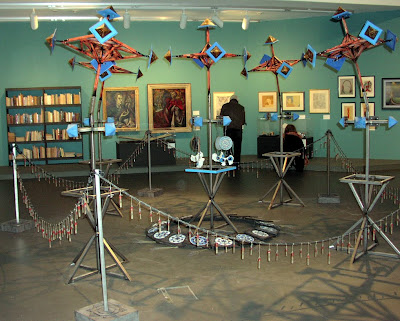 thankyou for such a great post. I wish I could go to this exhibition, it sounds very interesting!