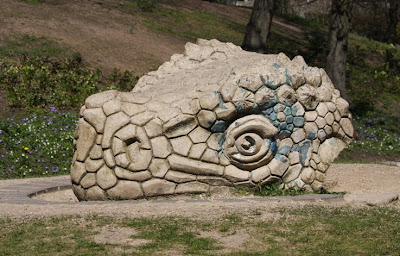 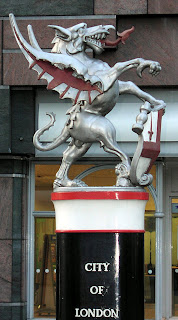 Fancy coming on a dragon hunt?

With St George's Day this week, celebrating England's national dragon slayer, how about a quest to find what dragons might still be lurking in England's ancient capital?

Unlike St George and other legendary knights of old, I'm not suggesting chopping their heads off with mighty swords or running them through with sharp, pointy lances. They are, after all, the last survivors of an endangered species - and in many ways are our protectors rather than a threat. I prefer to capture the dragons of London on camera.

A web search told me that I am certainly not the first person in London to go dragon hunting. The City of London Dragon Photo Safari offers tourists and city-dwellers a guide to photo opportunities in the City of London on the theme of dragons.

"London dragons inhabit a complex world of ancient ledges, curving architectural spans and elusive corners. They secret themselves in places of distraction, extreme texture and busy background. To capture photographs of London dragons requires almost a sixth sense, an awareness that ... just over your shoulder could lurk ... a fierce eye, a fleshy snout, a darting tongue, claws bared beneath rising wings."

Indeed, the dragons of London are very good at hiding themselves, but the dragon safari offers maps and pictures showing you just where to find them.

The safari is contained with the City of London - or the Square Mile encompassing the heart of the ancient city. It points out the boundary dragons that guard the edges the city; the tall, Gothic Temple Bar dragon that stands near the Royal Courts of Justice; a dragons' lair within the arches of Holborn Viaduct; a pair lurking hopefully near Smithfield meat market; several spitting dragons outside Bank underground station; and the oldest dragon in City at the Monument, commemorating the Great Fire of London.

I spotted the spitting dragon (pictured above left) outside Moorgate station and another (bottom left) lurking in the leafy suburbs, so there are definitely more dragons in London than the safari maps out, but it is a very good guide for those starting out as dragon hunters.

To take dragon hunting seriously, you need to study your subject carefully and learn about the history and origins of these creatures. You should also consider what to say to those who argue that dragons do not exist.

They often say dragons are really just a misinterpretation of the remains of dinosaurs, such as the poor decapitated beast at the top of this page and to the right. It certainly does look a little dragon-like. You can find it, with its more intact relatives within Crystal Palace Park.

There are also those who argue that the creatures who stand either side of the cross of St George on the City of London Coat of Arms are not dragons either. They say that the Coat of Arms originally had a fan-shaped device that was misinterpreted as dragon wings, then a pair of dragons, over the centuries.

I say that this is just another example of the cleverness of dragons. They are masters of magic as well as being fearsome fighters.

St George and other Christian knights might have thought they had killed off the last of the dragons, believing them to be evil symbols of paganism, but the dragons weren't evil, and they didn't die, they just hid. All it needed was a little imagination to bring them back.

Now, the Dragons of London are our protectors and friends, living among us and watching over us, rather than torching our homes and devouring damsels. Dragons have a very good reputation for guarding treasure, which is appropriate for their place safekeeping England's modern financial centre and the ancient treasure store for the Crown Jewels in the Tower of London.

And there are those who suggest that the dragons of London might actually be very, very old - the white dragons of our pagan Anglo Saxon ancestors. They slept deeply within the land and within our subconscious minds for centuries. Then, when the time was right, they began to return to their rightful place in England's capital city, inspiring artists and sculptors to bring them back to life on London's Coat of Arms and as guardian statues.

I think it is good that we have learnt to live alongside these ancient beasts. Who knows, with a little more imagination, they might even step down from their stone and metal monuments and truly walk among us once more.

This is totally the best idea I have heard in a long time.

I am SO doing that City walk.