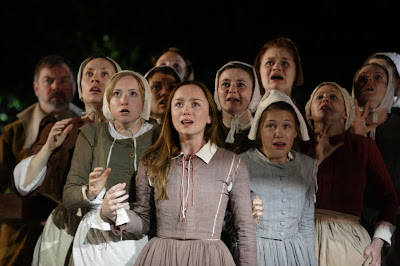 On this day, June 10, in 1692 Bridget Bishop, the first person to be tried and convicted in the Salem witch trials was hanged.

From June to September that year, 19 men and women from Salem, Massachusetts, in the USA, were hanged after being convicted of witchcraft. Another man was pressed to death by heavy stones after he refused to enter a plea in response to charges of witchcraft. About 150 others spent time in jail, in fear of their lives, as the witch hunt intensified throughout the area.

No one knows exactly what caused the witchcraft hysteria and persecution; politics, economics, religious differences, social factors, sexism, classism, insanity, paranoia and a grab for land have all been blamed. Most people now agree they were a terrible miscarriage of justice and stand as an example of how normal, well-meaning people can do appalling things to their fellow men and women.

Playwright Arthur Miller used the Salem Witch Trials as the subject of his play The Crucible.

He wrote it in the 1950s, during the McCarthy period in America, when many people were accused of being Communists and brought before government committees charged with subversive activities, often with little evidence to back the allegations. This became known as the McCarthy Witch Hunts.

It led to the term "witch hunt" becoming commonly used to describe all kinds of persecution in the form of investigations carried out ostensibly to uncover subversive activities, but actually used to harass and undermine those with differing views.

The Crucible by Arthur Miller is currently being performed at The Regents Park Open Air Theatre, in London. For more details and to buy tickets, visit the website http://openairtheatre.org/ The picture at the top shows Emily Taaffe (Abigail Williams) and company in the production. Photo by Catherine Ashmore

The Crucible: A Play in Four Acts (Penguin Modern Classics)

is available through Amazon