Howl at the moon and find your inner wolf 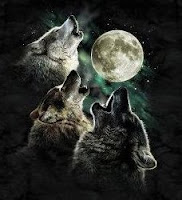 A charity fundraiser is trying to get more than 250 people in one place to howl like a wolf in an attempt to break the record in the Guinness Book of Records.

Event organiser James C Wallace II wants as many people as possible to turn up to Dede Plaza, Indiana, in the USA, on July 26 from 8.30pm to take part in the record-breaking attempt, called Howl Yea! For Child Safety in the Wabash Valley. The event is to promote non-profit organisations for young people in the area.

Now, Wabash Valley in America might be a long way from London, England, where I live - and I won't be flying over there to take part - but reading about this event reminded me just how much humans have been fascinated by wolves for a very long time.

OK, for much of history wolves have been seen as monsters - the villain in fairy tales is so often the Big Bad Wolf - but for most of the 20th century wolves were cool.

Actually, it probably started a bit before that, in 1898, with Ernest Thompson Seton's description of the wolf Lobo in his book Wild Animals I Have Known.

Lured by a bounty posted by ranchers in New Mexico, Ernest Seton set out to hunt an "outlaw" in the form of a wolf that was raiding farms. His experience led him to respect wolves as intelligent, compassionate, individualistic beings who were trying to survive in a tough environment.

His short story, Lobo the King of Currumpaw, became a classic and helped change people's attitudes towards wild creatures.

Seton's collection of stories was closely followed by Jack London’s The Call of the Wild,

in 1906 - novels about a domesticated dog finding his inner wolf and a wild wolf befriending a human. Both of these books are still widely read today.

The fashion for all things wolfish really took on and, by the end of the 20th century, wolves were everywhere in popular culture, while the real thing sadly declined in the wild.

They continued to inspire books - one of my favourites being Women Who Run with the Wolves: Contacting the Power of the Wild Woman

. They starred in movies - from Lon Chaney's 1941 film The Wolf Man

to such things as The Company Of Wolves

and Dances With Wolves

. Many a pagan wanted Wolf as their spirit guide and, perhaps in a similar vein, wolves adorned many a wall

But it all went a bit too far. From being cool in the nineties, wolves became kitsch in the noughties. Apart from swooning teenage Twilight Saga

fans, most people felt that they had been there, done that, worn the T-shirt.

Until, in fact, a T-shirt turned some of the kitschest of wolves into something humorously desirable.

I'm talking, of course, about the Three Wolf Moon T-shirt

that became an internet meme.

"Pros: Fits my girthy frame, has wolves on it, attracts women. Cons: Only 3 wolves (could probably use a few more on the 'guns'), cannot see wolves when sitting with arms crossed, wolves would have been better if they glowed in the dark."

Since then, more than 1,700 people have posted similar reviews - claiming the T-shirt made them irresistible to the opposite sex, struck fear into their enemies' hearts and had magical healing properties. The Three Wolf Moon T-shirt became an internet phenomenon and a top-selling item of clothing.

Wolves may no longer be Kings of Cool, but in the role of Trickster, they still lead the pack.

It is still OK to have a bit of fun and embrace your inner wolf - and to do that, what could be more appropriate that to get together in a huge pack and howl at the moon on a summer night!

For more information on the Howl Yea! For Child Safety in the Wabash Valley event, including the Guinness Book of World Records Sanctioned Attempt for the Most Number of People Simultaneously Howling at the Full Moon, contact James C Wallace II, event organiser, at howlyea2010@yahoo.com

http://www.badwitch.co.uk/2010/01/review-on-monsters-history-of-our-fears.html
Wild Animals I Have Known

The Call of the Wild

Women Who Run with the Wolves: Contacting the Power of the Wild Woman (Classic Edition)