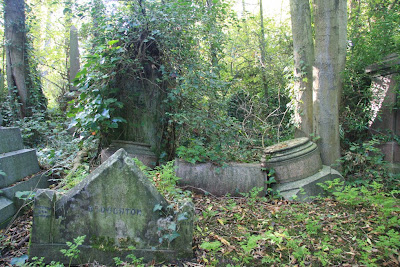 "A Gothic nature reserve" is how Secret London - an Unusual Guide

Although many of those who love Nunhead consider it on a par with Highgate Cemetery for its over-the-top high Victorian architecture and wonderfully spooky atmosphere, it is actually one of London's little-known treasures. Very few guidebooks bother to mention it.

Nunhead was of the seven cemeteries built on the outskirts of London in the 19th century to relieve overcrowding in the City graveyards and it was very popular for burials in Victorian times.

However, after all the plots were filled, it began to decline. Over the years, tombstones toppled and it became a overgrown with trees, ivy and brambles. Nunhead Cemetery closed in the 1970s because the company that ran it could no longer afford its upkeep.

This was probably very sad for the relatives of those who were buried there, but it was wonderful for wildlife. Owls, woodpeckers, spiders and butterflies happily made their homes in the forests that grew among the crumbling monuments - unperturbed by rumours of a black-clad ghost that also began circulating at around the same time.

In 1975, a workman reported seeing an apparition of a “tall dark stranger” emerge from the eastern catacombs and disappear into impenetrable undergrowth. Similar tales were heard from others who ventured into the depths of the graveyard during the years that it was closed - whether on official business or trespassing as a dare on a dark night.

Nunhead Cemetery reopened to the public in 2001, parts were restored and the wide avenues encircling the site were cleared. However, much has been left as a nature reserve, making it a wonderful place to walk and admire the ruined Gothic splendour of the cemetery while listening to songbirds and admiring the beautiful colours of the autumn leaves.

It would be a perfect to visit this Halloween - or Samhain - to honour the dead, to see how life is renewed through the forces of nature and, just maybe, to catch a glimpse of a ghost... 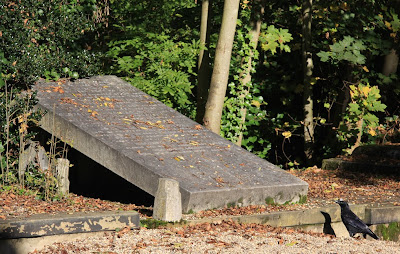 This may be the single most awesome-looking graveyard I've ever seen. I definitely hope to see it one day.

I know this is a bit more Harry Potterish, but Oz is involved and I thought your readers might find this of interest.