Signs of spring and hope 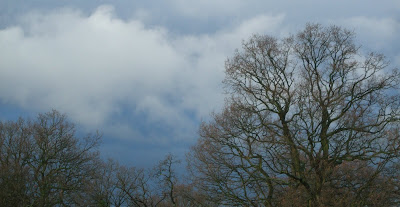 The photo above, of bare treetops, is the view from my mum's hospital bed, where she is recovering from a bad fall last week.

She is in the same hospital as my father was before he died just over four years ago. Although he was in a ward on the next floor up, the view from his window was of the same trees, which surround a small park over the road behind the hospital.

He died in the autumn, just before Samhain. I would often look out of his bedside window in the weeks before that when I visited him in hospital and, towards the end, as I sat long vigils at his bedside while he was unconscious and slowly slipping away.

Most of the trees along the edges of that small park are horse-chestnuts - or conker trees. It had been a long, hot summer the year my father died and in the autumn the leaves would normally be beautiful shades of yellow, orange, red and gold. But that year they were shrivelled and brown. It was the year the horse-chestnut trees in my area were first affected blighted with leaf miner moth - an insect that discolours and kills leaves.

Horse-chestnuts have been among my favourite trees since I was a child. We had a massive horse-chestnut at the end of our long garden. When I was young I loved to play in the shade of its branches. I found the leaves fascinating - you could strip away the green part with your finger nails to turn them into fish-bone-like skeletons - and in the autumn I loved to collect conkers for conker fights.

But, in that autumn four years ago, it seemed that as my dad lay dying, so were the trees. All things must end, but it isn't easy to see loved and cherished things pass away.

My father died; but the trees are still there. Although the horse-chestnut trees in England are far from well, and many are affected by cankers as well as leaf miner moth, some are recovering and treatments are being searched for.

Those trees outside the window of my mother's hospital ward might look dead and bare, but there are little buds forming on the branches. Within a few weeks, the first green leaves will grow. Those beautiful trees are not dead yet, just resting for the winter.

My mother appears to be recovering well from her fall. This week she is due to be transferred to a hospital that specialises in rehabilitation physiotherapy. The doctors and nurses who are treating her believe that she will be home before too long - possibly fitter and more mobile than she was before her fall.

When I look out of her window at those trees now, I don't see death all around me - I see signs of recovery. While there's life, there's hope.

Best wishes for your Mum's recovery!